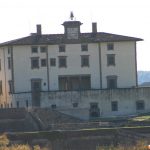 Who said that Florence is just about Renaissance art? We often like to compare the Renaissance with contemporary art, as it happened in 2014 with the exhibition featuring Michelangelo and Jackson Pollock. Now it’s the turn of Antony Gormley, British sculptor, to display his works at the Forte Belvedere.

Sir Antony Gormley (August 30th, 1950) is a British sculptor, famous for his works “Angel of the North” in Gateshead (Northern England) and “Another Place” in Crosby Beach, close to Liverpool. The artist received several important prizes during his career. One of his works was sold by Christie’s in 2011 for around 3.5 million Pounds. Now he will have to vie with Renaissance city, the homeland of Michelangelo. What else can a sculptor aim for?

As reported by the local newspaper Il Corriere Della Sera, the sculptor is controlling Forte Belvedere since Monday April 13th, 2014, while cranes are placing his statues on the battlements of the ancient fortress.

This fortress was built between 1590 and 1595 for Ferdinando I de Medici Grand Duke of Tuscany. It is located on top of the Boboli hill, where the monumental gardens behind the Pitti Palace meet the ancient 13th century defensive wall of Florence. The Forte Belvedere has been closed for several years to be restored and to make it safer, after two young people, respectively in 2006 and 2008, fell from the battlements dying after a 30 ft plus fall. Reopened in 2013, in 2014 Forte Belvedere has been the location of the magnificent wedding party of Kim Kardashian and Kanye West.

The works by Antony Gormley include 105 sentinels that will “guard” the fort, along with a work in memory of Luca and Veronica, the two young persons died falling from the fortifications.