The Opera del Duomo Museum in Florence features the greatest collection of Donatello sculptures in the world. In late 2015, Pope Francesco will officially visit Florence Italy and in preparation for this event, the Opera del Duomo (the institution responsible for maintaining the Cathedral, founded back in 1296) started a campaign that includes the cleaning of the Baptistery of San Giovanni and a complete restoration and enlargement of the Opera del Duomo Museum, which is going to become one of the greatest Florence Italy attractions. The Museum was closed about one year ago and will reopen only in November 2015. With a lot of foresight (which often lacks to other cultural institutions in Italy) instead of leaving their Donatello sculptures in storage, the Opera decided to move them to New York City, where the MoBiA (Museum of Biblical Art) organized “Sculpture in the age of Donatello”, a wonderful exhibition that will last until June 14th, 2015.

A once in a lifetime event

My congratulations go to both the Opera del Duomo and the MoBiA for organizing something that will certainly have a great success and will promote Renaissance Florence across the ocean. The exhibition displays twenty-three sculptures, mainly by Donatello but also Filippo Brunelleschi, Luca Della Robbia and Nanni di Banco, all made to decorate Florence Duomo in the early 15th century, when the Cathedral was almost complete. Most of these works never left Florence before: this is certainly a once in a lifetime event. 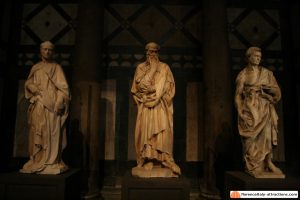 Among the statues of prophets by Donatello, made specifically for Giotto’s Bell Tower, there are three that until some weeks ago had been on display in the Baptistery of San Giovanni. I hope the MoBiA will choose to display them in the same way as they did in Florence: the growing ability of the artist and the growing humanism in those three Donatello sculptures are easy to read and explain the long process that led to the ideal of perfection, summarized almost one century later by Michelangelo with his statue of David.

The exhibition is open from Tuesday to Sunday, more info on the MoBiA location and on the ticket prices can be found in the MoBiA official website.