Palazzo Vecchio, which means old palace, is the most important civil building in Florence Italy and was partly built between 1299 and 1314 and served as the main governmental building for the Republic of Florence. Palazzo Vecchio, also called Palazzo della Signoria or Palazzo dei Priori, was extended by Cosimo I de Medici and connected to the Palazzo Pitti via the famous Vasari Corridor. Today the palace is the seat of the Municipality of Florence but also hosts a museum and is one of the top Florence attractions.

Palazzo Vecchio is located at the Piazza della Signoria in the centre of Florence, next to the Uffizi gallery. In front of the palazzo you will find a replica of the David by Michelangelo, the original David statue is located in the Galleria dell’Accademia, but the copy stands in the original location. The works of art on display in the Palazzo Vecchio museum are pieces by Donatello, Bronzino, Pontormo, Vasari, Michelangelo and more artists of the Renaissance. The Palazzo Vecchio museum also houses the famous Dante Alighieri death mask. This famous mask, which appears to be small in size, is the main subject in the modern novel Inferno by Dan Brown, and is one of the famous pieces from which the authenticity and history is not entirely certain. The mask is in good shape and this is remarkable for such a fragile garment, one could argue.

Palazzo Vecchio can be found at this location:

The Deposition of Christ – Agnolo Bronzino 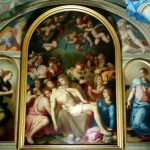 The Deposition of Christ by Agnolo Bronzino was painted between 1545 and 1553, in order to decorate the private chapel of Eleonora di Toledo, the Grand Duchesse of Tuscany. Agnolo Bronzino was an important mannerism painter, living in Florence Italy. This was not the first Deposition of Christ that Bronzino created, however. The original painting was ordered by Grand Duke Cosimo I de’ Medici for his wife Eleonora of Toledo and painted between 1540 and 1545 by Bronzino. So what happened to the original? Read more >