Yesterday, on April 9th 2015, director Ron Howard was in Florence, Italy to explore the locations of Inferno film, the movie inspired by the novel of Dan Brown. The local newspaper “La Nazione” reported the news, and I translated it for you. Here is the original text in Italian, with a photo gallery of Ron Howard in Florence.

Florence, April 9, 2015 – “Going around Florence I made a quick stop to see the David. I noticed that there is a side that attracts more tourists.” Director Ron Howard joked on his Twitter profile after the visit to the Accademia Gallery in Florence today, posting a photo of the backside of Michelangelo’s David. The director is in and around the city in view of the filming of “Inferno”, the last film based on the bestseller of the same name by Dan Brown. Today Howard was also in Palazzo Vecchio, the Uffizi and Boboli Gardens for the inspections of the shots that are likely to start in May.

Yesterday Ron Howard had been noticed in a restaurant in Piazza Strozzi, in a room with about 40 people, the film crew. The director had already been in Florence last October to visit some locations of Inferno film and had met the mayor Dario Nardella who had shown him some of the most evocative spaces of Palazzo Vecchio. 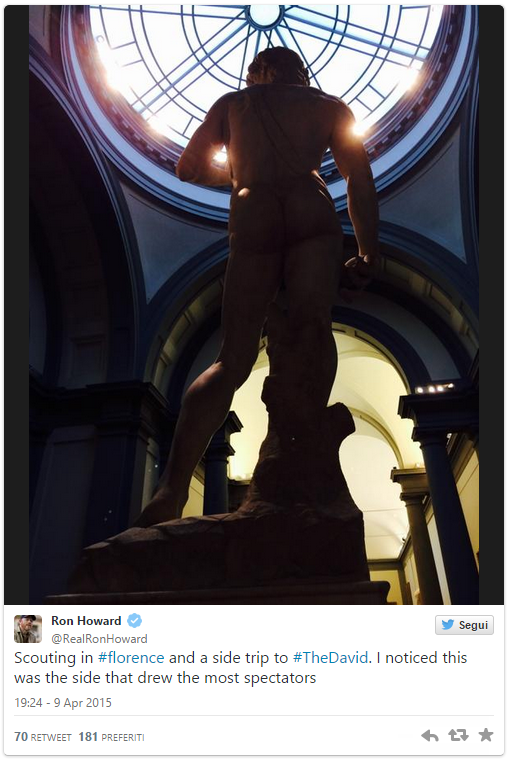 Initially scheduled for December 2015, Inferno film will be probably released on October 2016. The reason for this is unknown, but comments around the industry believe this is to avoid the competition with the new episode of the Star Wars saga, that will also be released in December 2015. The Inferno film delay means we won’t have crowds of tourists willing to take an Inferno tour in Florence until the 2017 tourist season: what a shame for a tourist guide like me!