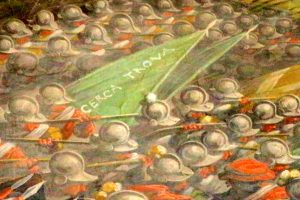 A tour which is becoming more and more popular in Florence, is the Dan Brown’s Inferno tour. The book by Dan Brown (and the film by Ron Howard) have Florence as the main stage, touching many amazing points of interest. Most of the story unfolds in Palazzo Vecchio, in the Hall of the 500 and through the secret passages, but the book also mentions the Badia Fiorentina, the Boboli Gardens, the Vasari Corridor, the Uffizi Gallery, the house and church of Dante, the Duomo and the Baptistery of San Giovanni. The Inferno book deserves a lot of credit for promoting many attractions which are often off the beaten path and an Inferno tour is very enjoyable, given you don’t have to wait in line. Generally, Inferno tours of Florence are not crowded, and they focus on a part of the story (the most important), including Palazzo Vecchio, the house and church of Dante and the Baptistery. Other tours, full-day, also involve a visit to the Boboli gardens, while the Vasari Corridor, recently closed for restoration, is only visible from outside at the time being (I will update when I have news). Read on, and pick the best Inferno tour!

This is a tour I know very well… I work for this agency, and I proposed the tour back in 2013, just one month after the Inferno book was in stores. I have provided the tour many times, with customers from anywhere in the world. Now, other guides provide the tour as well, but if you pick this one, you have a high chance to have me in person as your guide. The tour starts at via della Ninna 7, the street between Palazzo Vecchio and the Uffizi, at 3 PM (meeting time: 2:45 PM). From there, you can see part of the Vasari Corridor before visiting the Hall of the 500, the apartments of the Medici and the room of the maps, with a necessary stop to see the death mask of Dante. After leaving the palace, the tour will continue with the house and church of Dante, to finish at the Baptistery, where you will see the amazing gates of Paradise and the mosaics of the ceiling that inspired Dante’s Inferno. After the tour, for the next 48 hours, you can still use your Baptistery ticket to visit the Crypt of Santa Reparata, the Opera del Duomo Museum, the Bell Tower and Brunelleschi’s Dome.

This is another afternoon Florence Inferno tour, which starts at the fountain of Neptune (meeting at 2:45 PM). Compared to the other one, this is cheaper and faster (2 hours instead of 3), and it has the same itinerary, but it doesn’t include the entrance to the Baptistery, preferring the Duomo (which doesn’t need an entrance ticket). It is a good option if you are on a budget, but missing the Baptistery inside, you are missing a big part of the Inferno story, plus an amazing attraction. This also prevents you from visiting the other attractions that would be included in the ticket, as happens for the previously reviewed Inferno tour.

This is a morning tour, which starts at 9:30 AM (but from march 2017 it will start at 9 AM). Not very different from the first one I reviewed, but this one has the option to book an additional option: a tour of the Uffizi Gallery and the Vasari Corridor. Unfortunately, with the Vasari Corridor currently closed for restoration, this option will only provide a tour of the Uffizi Gallery, and the Corridor will be visible only from outside. In case you decide to go for the full-day experience, there will actually be two tours: one in the morning, the other one in the afternoon, and you will have a long break for lunch.

At the moment, the Inferno tours available do not offer the Palazzo Vecchio secret passages, but here is an option for you: a tour only focused on Palazzo Vecchio, with an internal guide of the palace, that will show you some of the secret passages, most of which are mentioned in the Inferno book. In particular, with this tour you will see the secret staircase of the Duke of Athens (used by Robert Langdon to escape from Palazzo Vecchio) and you will have access to the room above the ceiling of the Hall of the five-hundred, that Robert Langdon and Sienna Brooks crossed and where the killer Vayentha fatally fell. It is not an Inferno tour, meaning that it is not focused on the plot of the book but mostly on the history of these secret passages. This tour starts at 10 AM in Palazzo Vecchio, lasts for approximately 75 minutes, and after the tour, included in the price, you will have a nice typical lunch.

Boboli and the secret gardens of Florence

Another great attraction which is not normally included in the Inferno tours are the Boboli Gardens, and if you want to complete your Inferno journey, you can’t miss them. Here is a tour that will show you the Boboli Gardens and more private and secret places like the Bardini Gardens, in a 3-hour itinerary off the beaten path, especially good in Spring, when the flowers are blooming. As a plus, after the tour, you can still use your ticket to visit (on your own) the Pitti Palace (Argenti Museum and Costume Gallery). You can complete your Inferno tour with this amazing walk.

What other suggestions can you find in this section?