Art historians set the start of Florence Renaissance in 1401, with an event that involved Filippo Brunelleschi: the competition for the Baptistery doors. It is a conventional date of course, which doesn’t explain a lot: it’s not like one day you are in the Middle Ages and the next day you wake up in the Renaissance. What historians and art historians agree on is that an artist in particular, goldsmith, architect, sculptor, engineer, was the catalyst of the re-birth: Filippo Brunelleschi.

Filippo Brunelleschi was born in 1377 from a rich family. His father, Ser Brunellesco, was a note keeper and also ambassador for the Republic of Florence (he met the Holy Roman Emperor). Filippo, sent to a school of maths, soon revealed his passion for arts; during this period, the Duomo was still under construction, and Brunelleschi’s father was called to be part of a commission to discuss on the vaults of the Cathedral. When it became clear that Filippo had a passion for arts and also good qualities, his family acknowledged to send him in the workshop of a goldsmith. This kind of apprenticeship was common to many artists of the time that later became painters or sculptors. 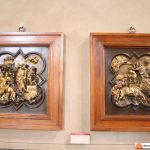 It was a work of goldsmith to catch the attention of Brunelleschi: the Merchants Guild, responsible for decorating the Baptistery, held a competition to find the best artist, giving each competitor the necessary bronze and instructions to create one of the 28 panels that were planned to be part of the doors, representing the Sacrifice of Isaac. Filippo Brunelleschi and Lorenzo Ghiberti were the finalists of the competition, but the work was assigned to Lorenzo Ghiberti. The two panels used for the competition are visible in the Bargello Museum.

Brunelleschi between Rome and Florence

The loss wasn’t certainly good for Brunelleschi’s ego, but, in the end, it revealed a good thing. Together with his great friend Donatello (the sculptor), Filippo went to Rome, studying the ancient Roman architectures, in particular the Pantheon and his dome, this would reveal extremely useful later. Another thing Brunelleschi learnt, compulsively drawing the ancient Roman ruins, was perspective. His “re-discovery” of perspective determined the incredible improvement of painting in the Renaissance.

It was 1418 when the Republic of Florence held another competition: nobody could solve the issue of the Cathedral’s dome. In an effort to build the largest Cathedral on Earth, the city of Florence was facing an impossible problem: no tecnology, in 1418, allowed to build a dome with 50 meters (164 feet) diameter. Filippo Brunelleschi and Lorenzo Ghiberti were finalists again, and even though Lorenzo didn’t have any particularly original idea, the job was initially assigned to both. After starting the construction Brunelleschi, not happy, called himself sick for a couple of weeks. The controllers noticed how Ghiberti had no idea on how to proceed and finally decided to award the project to Filippo alone, raising his salary.

Being the master engineer of the Cathedral’s dome made Brunelleschi famous in all of Italy. He received the commission to build the Spedale degli Innocenti (1419), sponsored by the Silk Merchants Guild and also by Giovanni di Bicci de Medici. In 1420 he built the Barbadori Chapel in Santa Felicita and shortly after the Sagrestia Vecchia in San Lorenzo, again for Giovanni di Bicci and the Medici family. In 1429-30 he built the Pazzi Chapel, then he received the commission to completely rebuild the churches of San Lorenzo and Santo Spirito. In 1443, he competed to design Palazzo Medici, but Cosimo the Elder preferred the project by Michelozzo. According to Vasari’s life of Brunelleschi, this same design was later used by Luca Pitti for the Pitti Palace.

Brunelleschi died in 1446, the night between April 15th and 16th, leaving 3,430 Florins (quite a large amount of money) and his house to his heir Buggiano, helper and apprentice of Filippo. His body was initially buried in Giotto’s bell tower, then in the Duomo. His tomb has been discovered in the 1970s, during archaeological excavations beneath the Cathedral.

Here is a nice map with all the locations of Brunelleschi’s works. Click on the markers to see more info. In case you want to take a Brunelleschi tour in Florence, contact us and we will arrange the tour for you.