There are many Michelangelo drawings; recently, one was sold by Christie’s for £ 3 million plus, but the ones I’m going to describe now can’t be sold, also because they’re drawn on a wall, in one of the most important museums in Florence, the Medici Chapels, and in a secret room, closed off to visitors.

Michelangelo and the Medici family 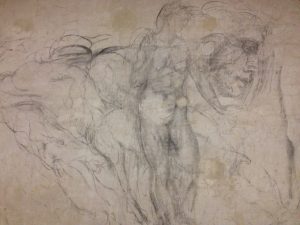 Michelangelo Buonarroti had a strange relationship with the Medici family. He loved Lorenzo the Magnificent, who had promoted his career when he was just a teenager, he had relations with the Medici Popes as well, but he didn’t hesitate to help the Republic of Florence when the Medici were banned from the city for the second time in history in 1527. Waiting for the impending battle against Pope Clement VII and the Holy Roman Emperor, Michelangelo spent his time reinforcing the Florentine wall. Of course, when the Republic surrendered, Michelangelo was scared for his safety. He went into hiding into a place the Medici Pope would have never imagined: a property of the Medici family, the New Sacristy of San Lorenzo, where Michelangelo was working at the Medici Tombs. Fact is that working there, Michelangelo had become a good friend of the vicar, who acknowledged to hide the artist in the basement, a small room where he was given food. At one point, we don’t know exactly if after 3 weeks or 2 months, the Pope publicly stated that Michelangelo was forgiven if he came out and finished his job. That happened, Michelangelo finished his job (barely, in fact, he gave instructions to Giorgio Vasari from Rome) and all was forgotten. This small room has probably been whitewashed many times until the 1966 flood of the river Arno filled the basement. With all the damage the city suffered because of that devastating flood, the basement of the New Sacristy was the last thing to worry about, and only in the 1970s it was decided to operate a restoration. And there came the surprise: behind the wet plaster, wonderful Michelangelo drawings came to life again, miraculously safe after the flood, to witness how the great artist, prisoner in the small basement, spent his time.

Michelangelo drawings in the New Sacristy

Michelangelo drawings reveal what he was thinking while trying to escape his punishment. You guess he was thinking of his death, maybe of a potential public execution, but incredibly what the artist was thinking of was his work. He was studying how to finish his current jobs, how to create new ones and how he would have adjusted some of his old ones. One of his drawings clearly represents hid David, completed more than 20 years earlier, in a different position. Another is a study for the legs of Giuliano de Medici Duke of Nemours; yet another drawing represents his Allegory of Night. These drawings reveal how Michelangelo lived for sculpture, it was not a job for him but a reason for his same existence.