“The Prince of Dreams” is an exhibition scheduled in Florence that will take place in Palazzo Vecchio from September 15th, 2015 to January 31st, 2016. For the first time in history since 1882, the Medici arazzi (tapestries) will be reunited in Florence, after the Savoy Kings of Italy decided to move part of the collection to the Quirinale in Rome. Designed by great artists of the renaissance like Pontormo and Bronzino, the tapestries will be on display in the Hall of the 200 (Sala Dei Duecento). 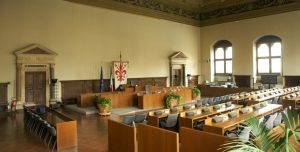 Who visited Palazzo Vecchio certainly remembers the Hall of the 500, the great hall is the most interesting room and also the entrance of the museum. Not many know that there is another large hall in the palace, the Hall of the 200, because normally that is not part of the visit, being used by the municipal council. The Hall of the 200 is in the most ancient part of Palazzo Vecchio, built in 1299, and it was destined by Alessandro de Medici, first Duke of Florence in 1532, to host one of the residual institutions of the republican government, a council of 200 people, hence the name of the room. In 1540, Cosimo de Medici, second Duke of the city, moved in Palazzo Vecchio with all his family and abolished any republican institution, changing the destination of the Hall, which was used to receive foreign ambassadors.

The Prince of Dreams

Cosimo de Medici, in order to decorate the room, commissioned a series of tapestries, and the drawings were assigned to Pontormo, one of the greatest artists of the century. Evidently the Duke didn’t like the result, because after the first tapestries were ready he turned to Bronzino, pupil of Pontormo, who drew the remaining tapestries of this incredible series, all depicting the Stories of Joseph. Joseph, one of the main characters of the Old Testament, is the Prince of Dreams: youngest son of Jacob, he was sold by his brother to Egyptian merchants, but after many adventures, his ability to interpret dreams rescued him from prison and made him the most important man after the Pharaoh. The twenty tapestries haven’t been together since 1882, when the King of Italy decided to split the collection, carrying some of them at the Quirinale Palace in Rome. Now, after 133 years, the tapestries will be reunited in Florence, in the exact same room they were made for. The Municipal Council of Florence just voted yes to the temporary move in the rooms of the Medici Palace to make room for the exhibition, which has been hosted in the Quirinale in Rome from January 20th, 2015 to April 30th, 2015, and is currently visible in the Royal Palace of Milan until August 31st, 2015. On September 15th, finally the tapestries will be back home, and the many visitors of Palazzo Vecchio will have a great chance to visit the Hall of the 200 again, exactly as it was at the time of Cosimo de Medici.