UPDATE (July 2016): the Vasari Corridor is closed for restoration works. No reopening date has been announced.

My daily bread and butter as a tourist guide in Florence is the Vasari Corridor Tour, inside one of the most inaccessible and exclusive attractions in Florence. Many tourists didn’t even know the Vasari Corridor existed until recently when it became popular being part of Robert Langdon’s itinerary in Dan Brown’s Inferno. In this article, I would like to go through the history of this peculiar building, designed by Giorgio Vasari in 1565, starting from the reasons why the Corridor was built.

The conspiracies against the Medici family

The Medici family had to face many enemies during their domination of Florence, which started in the first half of the 15th century.

The “other” branch of the Medici family

Alessandro was the last living member of the line of succession originating with Cosimo the Elder. Well, not exactly. Actually a woman, Maria Salviati, was the last one. She married Giovanni Dalle Bande Nere, a soldier whose ancestor was Cosimo’s brother, Lorenzo the Elder. The couple had a son (his name, go figure, was Cosimo!) , and he was just 17 in 1537, when Alessandro was killed. In the disorder that followed the Duke’s death, the most prominent personalities in Florence decided to acclaim Cosimo de Medici the new Duke of Florence. Most of this people were republicans, and they thought a 17-year-old Duke would be easy to manipulate. It was a crucial error. Cosimo de Medici, despite his age, made immediately clear that he meant to be a real master of the city. Other enemies of the Medici, who were in exile, moved war to Cosimo, but were rejected. Cosimo was recognized Duke by the emperor Charles V who had the most powerful army in Europe. Later, the Pope will grant Cosimo the title of Grand Duke of Tuscany.

In 1540, Cosimo decided to move from Palazzo Medici to the town hall of Florence, Palazzo Della Signoria: it was a way to confirm his power. Palazzo Della Signoria was a perfect fortress to defend the Duke, but at the same time, it wasn’t suitable as a home for a large family. Giorgio Vasari, the architect, tried his best to restore the interiors, but the Duchesse Eleanor of Toledo wasn’t happy. In 1549, probably using Eleanor’s dowry, the Medici family bought Palazzo Pitti (yeah, the family who conspired against Piero the Gouty). Since this was the new palace, Palazzo Della Signoria immediately became the old palace. That’s why, even today, we call it Palazzo Vecchio. By the way, moving from Palazzo Vecchio to Palazzo Pitti was not easy, also because Palazzo Pitti was not ready to receive the royal family. In the meantime, Cosimo de Medici ordered Giorgio Vasari to build a huge block of offices close to Palazzo Vecchio, the goal: total control on the public administration. Construction started in 1560 and this new building, the Uffizi, will later become the most important Museum in Italy.

A marriage to celebrate, a Corridor to build

In 1565, it’s time for celebrations. Francesco, the legitimate heir to the throne of Grand Duke of Tuscany, will marry Joanna of Austria. Cosimo wants to show his guests, especially ambassadors, all his power and magnificence. This is the reason why the courtyard of Palazzo Vecchio is frescoed by Vasari with views of all the main cities of the Austrian Empire; but Cosimo, with the excuse of the celebrations, finds a way to solve another problem: soon enough the family will move to Palazzo Pitti, and there is a lot of narrow streets to go from Palazzo Vecchio to Palazzo Pitti back and forth, on a daily basis… a lot of windows for a potential attack to hit the Grand Duke. In a hurry, Vasari has to build a safe passage connecting the new residence to the old one: the Vasari Corridor.

The Vasari Corridor: an “emergency exit”

Vasari is given just five months to build the Corridor, and he needs some good idea. He uses the Uffizi (under construction) as part of the passage. They’re just steps away from Palazzo Vecchio, and they’re built in the area between Palazzo Vecchio and the Arno river, right where you need to go to reach Palazzo Pitti, which is on the other side: a short passage, sustained by an arch, crosses via Della Ninna and connects Palazzo Vecchio to the Uffizi. The next challenge was to cross the river. Unfortunately, Ponte Vecchio is about 300 foot away, and the fish market was held right there, on the right bank of the river.

Cosimo will move the market in a new area, and Vasari will have to build a new structure of pillars and arches to sustain the corridor, from the Uffizi to the bridge. Crossing Ponte Vecchio is the easy part. Shops on the bridge (mainly butcher’s) offer a good support to the Corridor. The problem is that on the south side of the bridge, an ancient tower stands right where the corridor should be built. Somehow the Mannelli family, owners of the tower, after a controversy with the Grand Duke, saved their home from destruction. We don’t exactly know why Cosimo accepted their statement, that forced Vasari to find yet another solution (building the Corridor sustained by brackets around the tower). Maybe the Mannelli owned some compromising documents on Cosimo, or maybe Cosimo had a relation with their daughter. Fact is, many more buildings were destroyed to make space for the Corridor. After crossing via de Bardi sustained by three rounded arches, the Corridor passes through the De Rossi Tower. Not even a church was an obstacle: the Corridor is built right in front of the Santa Felicita church facade. This was also for a practical reason: through a door, the Medici could enter in a balcony inside the church, protected by a gate; given what happened in a church back in 1478, this makes sense.

Cosimo and Eleanore, in the end, will never live in Palazzo Pitti, neither did Francesco, the next Grand Duke, but probably he used the Vasari Corridor many times to reach Bianca Cappello, his secret lover, who lived close to Palazzo Pitti. Ferdinando I, the next Grand Duke, will actually move the family in the new residence, and probably was the first everyday user of the Vasari Corridor. He couldn’t stand the smell of the butcher’s shops on Ponte Vecchio, so he ordered them to move elsewhere, and the jewelers (who don’t stink) were called to fill the shops. Now, the funny thing: in those times, there were many boats of renaioli (people who dredged up sand from the bottom of the river Arno). Since the butchers used the river Arno to dump their waste, maybe, they thought, even the jewelers will do the same. The river below Ponte Vecchio became so crowded by boats, with people arguing for their right to dredge up (for gold), that authorities had to establish a calendar with strict rules to dredge up the “claim”!

During the 17th century, the Medici dynasty will prefer to stay in Palazzo Pitti; they will start to receive people there, instead than in the hall of the five hundred in Palazzo Vecchio. Palazzo Pitti was enlarged, and two magnificent apartments (to be used in Summer and Winter) were decorated for this purpose. Most probably, the family would use the Corridor just to attend the celebrations in Santa Felicita. The last Medici Grand Duke, Gian Gastone, didn’t even leave his bedroom, let alone use the Vasari Corridor. The Medici dynasty died out in 1737, and the new Grand Dukes of the Hapsburg family barely used Palazzo Pitti anymore. They preferred the smaller Palazzina Della Meridiana, built for them inside the Boboli gardens.

The Grand Duchy of Tuscany and many more Italian small countries became part of the Kingdom of Sardinia in 1860. The Kingdom of Italy was proclaimed one year later. Rome was the natural choice for a capital city, given the past glory of the Roman Empire, but the problem was that the sacred city (and all the region around, known today as Lazio) was not part of the Kingdom: it was part of the Papal States. Italy couldn’t choose the city that represented his birth, so it adopted the city of the Italian rebirth: Florence. Vittorio Emanuele II, King of Italy, moved to Florence and Palazzo Pitti was his Royal palace. He wanted to fill the Vasari Corridor, probably empty until then, with works of art, and decided that the Uffizi Gallery, the Vasari Corridor and Palazzo Pitti would be all parts of a huge Museum. On a side note, Rome became the capital city of Italy in 1870, after being conquered with the force by the Italian Army.

In 1938, the most powerful allied of Mussolini, Adolf Hitler, came to Italy. The trip, made by train, was meticulously planned, any opponent of the regime was imprisoned (just in case), and people went to applaud the fuehrer in any train station, even in the ones where the train would not stop. Florence was one of the stages of the trip, and Mussolini wanted to amaze his guest: a walk through the Vasari Corridor. During World War II, Florence was saved by his own monuments. The Allied Army decided to preserve the beautiful historical city center, and the city was not bombed. The Italian resistance was active in Florence. One of the couriers for important messages was Gino Bartali, the famous cyclist. Being an international star, with the excuse of training, he was one of the few Florentines to have an efficient bicycle, and he used it to carry messages for the partisans. Other members of the resistance used another way to avoid the German checkpoints: the Vasari Corridor. In 1944, the German Army, retiring to North, in order to slow down the pursuers decided to destroy all the bridges of Florence, but not Ponte Vecchio. Someone says because Hitler was there and was in love with Florence: I doubt he cared at all. Most probably it was Gerhard Wolf, German Consul in Florence. He also saved many Jews from the Holocaust and many works of art from shipping to Germany. Although Ponte Vecchio survived, the districts North and South of the bridge were destroyed, and the part of the Vasari Corridor crossing via de Bardi (sustained by three arches with columns) crashed.

One disaster after another

After the war, the slow work of restoration began. The part of the Vasari Corridor crossing via de Bardi was rebuilt, this time with a single arcade, and the Mannelli Tower had to be reinforced; but another disaster was about to happen: on November 4th, 1966, the waters of the river Arno flooded in all of Florence, putting at risk the Vasari Corridor structure. Finally, in 1993, a car bomb exploded during the night in via Dei Georgofili, close to the Corridor, killing 5 people. The target was the Uffizi Gallery, the most precious property of Italy, and the terrorists were the Sicilian mafia. Some paintings were lost forever, some other paintings could be recovered only in part and are on display in the very first part of the Vasari Corridor.

In 2013, the new book by Dan Brown, Inferno, that unfolds in Florence, sells a lot of copies in bookshops. Many tourists come to Florence to see the Inferno places, and one of them is particularly hard to access: the Vasari Corridor. Today, few agencies have a privileged access to the Corridor, and we collaborate with one of them. They provide both a complete Uffizi Gallery and Vasari corridor tour (3.5 hours, including 60 minutes inside the Corridor) and a Vasari Corridor tour (about 1:10, including 60 minutes inside the Corridor). You can contact us for more info on these tours.

Look at this video on the Vasari Corridor: 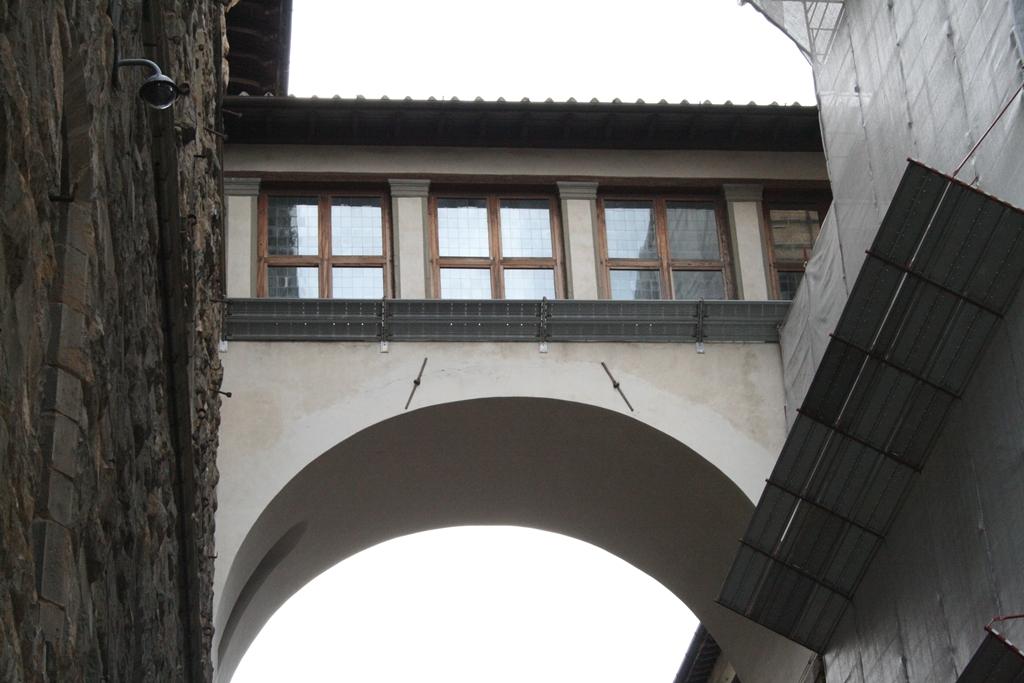