Boboli Gardens – A matter of space 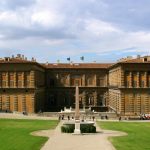 When the Grand Duke Cosimo de Medici and his wife, Eleonora di Toledo, decided to buy the Pitti Palace in 1549, the main reason was space and the main goal was building the Boboli Gardens. Space was not enough in Palazzo Vecchio, and also the location of the Pitti Palace, a bit uphill and not exactly in the city center, was great to avoid the stink of the city. Even before starting work of restoration on the new palace, Eleonora started building the gardens: Niccolò Tribolo, Bartolomeo Ammannati, Giorgio Vasari and Bernardo Buontalenti were the architects involved in the project. The most ancient part 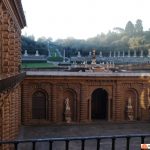 of the Boboli Gardens, right behind the Pitti Palace, is an example of “Italian” garden, made of box hedges creating geometrical shapes. Since Boboli is a hill behind the Pitti Palace, architects created a breathtaking sight from the windows of the palace, in particular from the “official” apartments of the royal family. Today, tourists can enjoy this view from the Palatine Gallery. Just after entering the gallery, look to your right and you’ll be amazed.

Evolution of the Boboli Gardens

The Boboli Gardens have been enlarged and changed throughout the centuries, and today they are as large as 45,000 square meters (about 111 acres). Small changes have been made to the primary axis of the garden (visible from Pitti Palace windows); the secondary axis going towards Porta Romana features a boulevard, used by the Grand Dukes of Tuscany to take trips with their coach. In almost 500 years of history, the Boboli Gardens have become an open air museum featuring ancient (mostly Roman) sculptures, together with Renaissance artwork.

Watch this amazing BBC video on the Boboli Gardens and Florence:

Famous artwork in the Boboli Gardens

The Boboli Gardens can be found at this location: 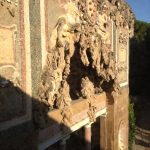 The so called “Large Grotto” in the Boboli Gardens is a typical mannerist architecture, started by Giorgio Vasari but mostly decorated by Bernardo Buontalenti. The three rooms of the grotto were an artificial representation of nature and contain fountains and frescoes. Originally an aquarium was hooked to the ceiling, and the first room also hosted the original unfinished Slaves by Michelangelo, now in the Accademia gallery and replaced by copies inside the grotto. The large grotto by Buontalenti is one of the locations of Dan Brown’s Inferno.