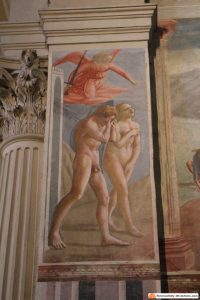 The Brancacci Chapel is a chapel in Santa Maria del Carmine universally known to have been painted by Masaccio, who worked on commission from the Florentine nobleman Felice Brancacci together with the teacher and friend Masolino. It’s one of the hidden gems in Florence that not many visit. This cycle of frescoes is considered very important in Renaissance art history, given that it’s one of the first examples of Renaissance painting. The Brancacci Chapel theme is the life of St. Peter, introduced by the stories of Adam and Eve, as to create a link between the beginning of the human life on Earth and the beginning of the Christian age. The frescoes in the Brancacci Chapel have a rich history of dramatic turn of events, of which I’m trying to give at least a brief idea. 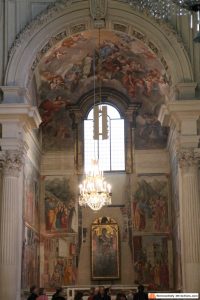 Let’s start by saying that Masaccio and Masolino did not finish the frescoes representing the scenes from the life of St. Peter; Masaccio because, called to work in Santa Maria Maggiore by the Pope, never returned from the eternal city; there he died in 1428 at just 27. Masolino lost his interest in the work when the Florentine political events advised him to stay away. It was the time when the Medici were rising to power: in 1433, Cosimo The Elder was imprisoned and banished from Florence, but when he came back in 1434, it was the turn of his opponents to be sent into exile. Among these opponents, was the Brancacci family who commissioned the chapel.

The Brancacci Chapel was not only unfinished, but was also subjected to an intervention to delete the memory of the family: the Medici party changed the name of the Chapel, now politically embarrassing, from “Brancacci Chapel” into “Chapel of the Madonna del Popolo”, but also demanded the cancellation of the scene of the Resurrection of the Son of Theophilus, the character painted by Masaccio who referred to Felice Brancacci, his relatives and associates. Following the new dedication to the Madonna, an ancient and venerated image of the Virgin (still there) was placed on the altar. 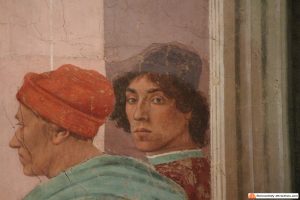 Although it is a little-known fact, the first restorer of the Brancacci Chapel was the famous painter Filippino Lippi, who completed it: in general the history of the interventions on the Brancacci Chapel is quite long. The chapel underwent several restorations, including one during the reign of Cosimo III (1670-1723), in which the nakedness of Adam and Eve were censored with fig leaves. Although we don’t know exactly when this intervention took place, it is supposed to have happened because of the well-known sanctimonious conduct of Cosimo III and his court, as Pietro da Cortona writes in his treatise on painting in 1652 that the figures, when painted, were all nude and were not considered neither lascivious nor obscene.

The unfortunate frescoes by Masaccio and Masolino suffered another blow with the fire occurred on the night of January 28th, 1771, which had, among others, the bizarre effect of changing color saturation because of heat.

Finally a small but very interesting curiosity: in 1780, the Brancacci heirs, long since moved to France, where they had changed the name to “de Brancas”, renounced to their rights on the chapel. The patronage passed then to the Riccardi family, the same that had bought the Palazzo Medici in Via Larga, which is why it is called Palazzo Medici-Riccardi.

The final work of restoration happened in the late 80s: cleaning the frescoes gave new life to colors. The blue backgrounds took life again and many more particulars were rediscovered.