Caravaggio Sacrifice of Isaac is a masterpiece of painting reproducing a biblical story of the Genesis. It is an early masterpiece by the painter, executed in 1603 for cardinal Matteo Barberini (future Pope Urban VIII). It is at the Uffizi Gallery since 1917 when it was donated by a Roman family who had the painting in his private collection.

The scene and the landscape 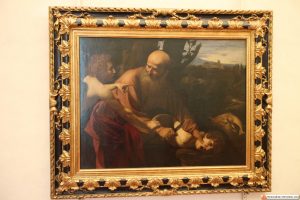 Caravaggio Sacrifice of Isaac illustrates one of the main episodes of the Old Testament as foreshadowing of Christ’s sacrifice on the cross and then almost always represented in the cycles of painting and sculpture dedicated to the Holy Writings. God tests the faith of Abraham, asking him to sacrifice his son Isaac, a son long-awaited, desired and achieved in old age. Although Isaac is his most precious good, Abraham is going to execute the order of the Lord, already holding a knife when an angel stops him. It is a particularly valuable work, as well as being an almost perfect composition, and contains, in the background, one of the rarest landscapes painted by the artist. 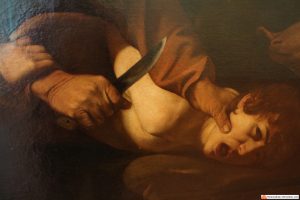 Caravaggio painted the decisive moment: the intervention of the angel while Abraham is wielding the knife to fatally hit his son and includes a landscape with distant hills reminiscent of the countryside around Rome, with a richly colored sky which indicates how the action is taking place at the sunset. As in many other works, Caravaggio has represented the most eloquent and intense moment in psychological and emotional terms.

As typical of Caravaggio’s paintings, the painter represents reality with no filter, no idealization. The painting looks like a photography and the emotions (Isaac scared to death, Abraham clearly exhausted, eaten by the double feeling caused by the necessity to obey to God and the pain for having to kill his son) are well represented in the composition. All the characters are very realistic, not idealized (not even the angel) and we can notice the dirty fingernails of Abraham (after all he was a nomad shepherd). These crude representations were the main reason why Caravaggio’s art was often disregarded and not accepted.

Caravaggio Sacrifice of Isaac – An S.O.S.?

Many think Caravaggio Sacrifice of Isaac was a request for help by the painter to the Cardinal Barberini. In that period, Caravaggio went into hiding because some hired assassins were chasing him (his life was not exactly quiet). In this sophisticated S.O.S. Isaac would represent the painter in danger, the angel would be the Cardinal, and the landscape would represent the place where Caravaggio was hiding. The angel wouldn’t point his finger to the ram, to indicate Abraham that he had to sacrifice the animal instead of Isaac, but to the landscape, to indicate the place where the Cardinal had to rescue Caravaggio. It’s a fascinating theory, doesn’t make a lot of sense though: it doesn’t take few minutes to paint a masterpiece and if Caravaggio needed urgent help I don’t think he would choose such a slow method to communicate with his protector.

This website uses cookies to improve your experience while you navigate through the website. Out of these, the cookies that are categorized as necessary are stored on your browser as they are essential for the working of basic functionalities of the website. We also use third-party cookies that help us analyze and understand how you use this website. These cookies will be stored in your browser only with your consent. You also have the option to opt-out of these cookies. But opting out of some of these cookies may affect your browsing experience.
Necessary Always Enabled

Any cookies that may not be particularly necessary for the website to function and is used specifically to collect user personal data via analytics, ads, other embedded contents are termed as non-necessary cookies. It is mandatory to procure user consent prior to running these cookies on your website.