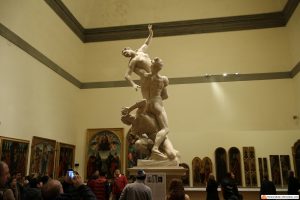 When you access the Accademia Gallery, you find yourself in a huge hall called the Colossus room (because once it hosted a huge ancient statue). In the center of the room stands a plaster cast of the Rape of the Sabine woman by Giambologna, and many paintings are on display at the walls. It’s very hard to keep my customers from going directly to the next room, which displays Michelangelo’s David. After staying in line for a while (despite booking your entrance), you want to go straight to the main event. When possible, I always try to show at least one of the many works of art in this room, and my favorite is the Cassone Adimari. Painted by Giovanni di Ser Giovanni, also known as Lo Scheggia, the Cassone Adimari shows the daily life in Renaissance Florence. The painter is not so famous (his brother Masaccio is much more famous), but the painting is something curious and well worth a look.

The Cassone Adimari is a painting on panel that most probably once was a piece of furniture. The name cassone refers to a chest: it might have been part of a dowry, containing bedding stuff; even if the name was not changed, today the consensus is that actually the Cassone Adimari was not a chest, but the head of a bed. The Adimari were a noble family, living in towers right in via dei Calzaiuoli, one of the most important streets in Florence, connecting Palazzo Vecchio and the Duomo. The painting shows a wedding party, made in front of the Adimari house, and is very interesting to see how Florence looked like in the 15th century, and how they had fun at a wedding party of an important family. The first picture shows all the Cassone Adimari, then I took some more shots to better identify the particulars; you can click on pictures to enlarge. 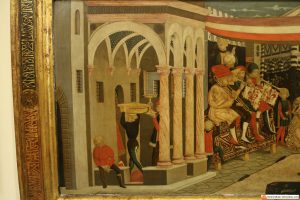 Here we can see a part of the palace that was typical of the Renaissance: the loggia. During the Middle Ages, families lived in towers that barely had any opening: no doors at the ground floor (you needed a ladder to enter), almost no windows; during the Renaissance, with a stable political situation, houses open themselves to the outside, becoming more welcoming. The loggia, often included in houses, was a place completely open to the outside, where rich families hosted the most important events, like a baptism or a wedding. 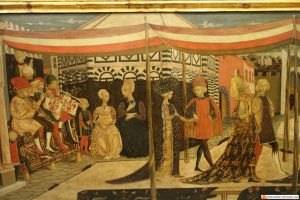 In this picture, we can see an orchestra playing music, something very important in Renaissance Florence. People are dancing in front of the Baptistery of San Giovanni: this part of the Cassone Adimari shows unequivocally where the Adimari houses were: that view on the Baptistery can be seen only from via dei Calzaiuoli. 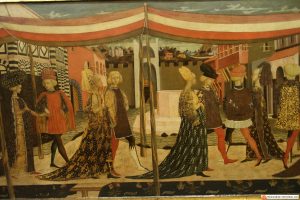 In the center of the Cassone Adimari, we can see people dancing. Well, it’s more like a parade than a dance, at least for how we consider dance today. In the landscape behind, we can see the defensive wall of Florence, built between 1282 and 1333. Perspective is not perfect, but hey it’s the head of a bed! 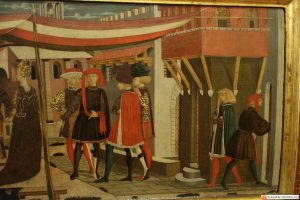 In the right part of the painting, there are more interesting things to see, especially about architecture: as you can notice, the building on the right expands to become larger on the second floor thanks to brackets. It was a common way to build until the 15th century when this practice was declared illegal. The reason why people used this method is that taxes were computed on the ground floor layout, so enlarging the second floor was a trick to pay as less as possible.