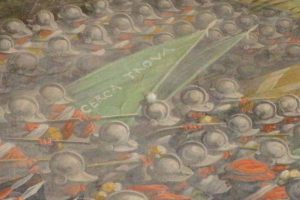 Inside Palazzo Vecchio, in the Hall of the 500, there is a fresco by Giorgio Vasari representing the Battle of Marciano (1567). The fresco depicts the decisive battle which is officially a battle between Florence and Siena, but actually it was between Cosimo de Medici (and his supporters) against his enemy, many of them being Florentine people. The fresco surface is very large, there are hundreds of soldiers fighting, and it’s impossible to see without a good zoom in your camera or binoculars, but Vasari painted the words “cerca trova” on a triangular green flag: they literally mean “seek find”. This message, after almost 450 years, remains a mystery. What did Vasari mean? Let’s go through the most famous interpretations.

“…wherein he designed a group of horsemen who were fighting for a standard, a work that was held to be very excellent and of great mastery, by reason of the marvellous ideas that he had in composing that battle; seeing that in it rage, fury, and revenge are perceived as much in the men as in the horses, among which two with the forelegs interlocked are fighting no less fiercely with their teeth than those who are riding them do in fighting for that standard, which has been grasped by a soldier, who seeks by the strength of his shoulders, as he spurs his horse to flight, having turned his body backwards and seized the staff of the standard, to wrest it by force from the hands of four others, of whom two are defending it, each with one hand, and, raising their swords in the other, are trying to sever the staff; while an old soldier in a red cap, crying out, grips the staff with one hand, and, raising a scimitar with the other, furiously aims a blow in order to cut off both the hands of those who, gnashing their teeth in the struggle, are striving in attitudes of the utmost fierceness to defend their banner; besides which, on the ground, between the legs of the horses, there are two figures in fore- shortening that are fighting together, and the one on the ground has over him a soldier who has raised his arm as high as possible, that thus with greater force he may plunge a dagger into his throat, in order to end his life; while the other, struggling with his legs and arms, is doing what he can to escape death.”

So, is Vasari cerca trova a clue to find the lost fresco by Leonardo? The National Geographic believes this is possible, and in 2012 they made some tests, using advanced technologies. Through the small holes made in the Vasari Battle of Marciano, they found some pigment that would be compatible with pigments used by Leonardo Da Vinci in other works. There is a big issue in this theory: when Vasari started decorating the Hall of the 500, he doubled the height of the hall and the message cerca trova is way above the level of the previous ceiling. If something remains of the fresco by Leonardo Da Vinci, certainly it’s not behind the message but well below that level.

A famous Italian proverb says: “chi cerca trova” (who seeks, will find). This saying is generally referred to someone looking for trouble, a sort of reminder of the consequences of your actions. Now, cerca trova is painted on a green flag of the rebel army fighting against Florence: contemporary historians describing this battle said that the rebel army had green flags with writings about freedom. Is it possible that Vasari wanted to make fun of the Medici enemies? I think it is, and I also think this is the best interpretation of the message. After all, the fresco was made for Cosimo de Medici, who fought and won that battle against the rebels.

Dan Brown, in his novel Inferno, uses the message cerca trova in the Battle of Marciano as a clue for Robert Langdon to solve a mystery. When he wakes up in a Florentine hospital, Doctor Sienna Brooks tells him he was repeating two words: “very sorry”, but later in the book he realizes he was actually saying “Vasari”.

At the same time, solving an anagram in Botticelli map of hell, he finds the words cerca trova that lead the protagonist into Palazzo Vecchio. This message is going to become very popular in few months, when the new film by Ron Howard based on the novel will debut in cinemas. I was in Palazzo Vecchio three days ago (April 8th 2015) and they were preparing the Hall of the 500 for filming.