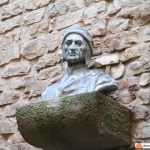 The church of Dante Alighieri was certainly close to Dante’s house, and luckily we know where the house was by documents in the archives of Florence. The building known as “House of Dante” is actually a recent one, built in 1911, but the place is correct. There were three churches close to Dante’s house, each of them reachable with less than fifty steps (yes, Florence had this many churches in the Middle Ages). One is the monastery of Badia Fiorentina; another one is the church of Santa Margherita de Cerchi; finally, the third one is the church of San Martino al Vescovo, which doesn’t exist anymore. So which of these churches was the parish church of the Alighieri family?

The answer is in historical documents: unfortunately, the church of Dante was San Martino, the one that was destroyed to build new palaces. Certainly Dante attended the other two churches as well; the Badia Fiorentina was a very important monastery in the age of Dante and Santa Margherita de Cerchi was, ehm… the church of Beatrice Portinari, the woman Dante loved. We are going to speak about this hidden attraction in Florence. 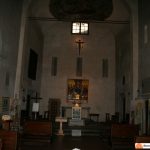 This church, known as the “church of Dante” by mistake, is the place where Dante met Beatrice Portinari. The two youngsters met in front of this church, she greeted him, they didn’t even speak, and Dante fell in love with her for all his life. They had to be really young, because Beatrice was already married at the age of 15, and died around 25. This church is visited by many tourists, even though there is not really much to see inside. The story of Dante 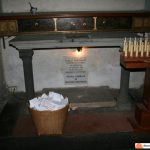 and Beatrice is a romantic story of an impossible love (Beatrice’s parents were wealthy bankers, Dante was a man of the middle class). The attraction inside is the tomb of Beatrice, where people leaves messages in a basket, if they have problems with an impossible love Even here there is a lot of discussion: the plaque with Beatrice’s name is too recent, and women were always buried in the parish church of the husband, not in their own.

The recent novel Inferno by Dan Brown mentions the church of Dante, identified as the church of Santa Margherita dei Cerchi. Dan Brown describes the church as deconsecrated and used for concerts, making a mistake. The church the novelist is talking about is yet another church few steps away: Santa Maria dei Ricci. He probably got confused because there is music playing all day in the “church of Dante” (but not concerts) and also a board advertising the concerts in the other church.