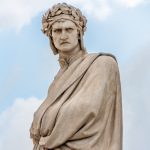 Dante Alighieri (1265-1321) was a Florentine poet, who wrote the greatest ever Italian poem: the Divine Comedy.

When Dante was born, Florence Italy was the largest European city and also the richest: in a continent dominated by the feudal system, merchants and bankers from the Republic of Florence made huge profits importing wool and exporting precious fabric. Family driven companies were in competition not only to make more profits, but also to gain control of the Republic itself. The city was split in two parties: the Guelphs, mainly ancient Italian noble families, supporting the Papacy, and the Ghibellines, mainly ancient noble families of German origin, formerly feudal lords, supporting the Holy Roman Emperors.

Political fights were violent and each faction ruled Florence alternatively. Most of the battles in Tuscany during the 13th century were actually not between Florence, Siena and Pisa, but between Guelphs and Ghibellines from all the region, in a sort of civil war. Each time a faction gained supremacy, the most important families of the losing faction were exiled from the city, losing all their properties.

In 1265, Florence was dominated by the Ghibellines, after winning the battle of Montaperti in 1261, but despite being a Guelph family, Dante Alighieri’s family still lived in Florence, most probably because they were not so important, thus not worth exiling. In the medieval Florence, to be a real citizen, you were required to be part of a guild. This was essential because only members regularly registered by guilds could participate to the public life and had the right to vote and to be elected. Dante Alighieri became part of the Physicians’ and Apothecaries’ Guild, like most of the artists, who didn’t have a specific guild (that’s quite strange in Florence, isn’t it?).

In 1289 Dante fights the battle of Campaldino, where the Guelphs beat the Ghibellines and take over again. With his own party in charge again, in 1300 Dante Alighieri is elected Prior of the Republic, the most important office in Florence, but in the meantime the Guelph party, now permanently and safely in power, splits again in two factions (how could it be different?). White Guelphs are the moderate wing and Black Guelphs are the extreme wing.

The Black Guelphs, helped by Pope Boniface VIII, will take control of Florence and Dante Alighieri, now a former Prior of the Republic, is sent into exile. He will die in Ravenna in 1321, without coming back to Florence.