Dante Alighieri (1265-1321) was a Florentine poet and politician. He was involved in the fights between Guelphs and Ghibellines and lived when Florence was the largest town in Europe. The age of Dante is very important for Florence. The city was expanding very fast and was starting the construction of the buildings that, even today, are the symbol of the city: Florence Duomo, Palazzo Vecchio, the churches of Santa Croce and Santa Maria Novella. Political involvment caused Dante to be banished from Florence in 1301, making him nostalgic, but also resentful towards his own city. From his exile, Dante wrote the greatest poem of Italian literature: the Comedìa, later named Divina Commedia (Divine Comedy). The protagonist of the epic poem is Dante himself, making an imaginative trip in the afterlife, as seen by a medieval Catholic believer. The poem is split in three parts: Inferno (hell), Purgatorio (purgatory), Paradiso (paradise). Dante’s Inferno is the very first part of the poem and also, by far, the most interesting. 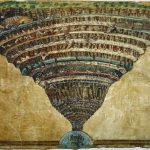 Dante’s Inferno is a funnel cave underground (exactly beneath Jerusalem), which goes down to the center of Earth. The shrinking floors Dante finds while going down the cave are called circles. Each circle is a place of damnation, dedicated to a particualr sin. Sinners are punished with a contrappasso (sort of karma effect), being forced, when possible, to do the opposite of their sin (often metaphorically). What’s really cool in Dante’s Inferno is that the poet doesn’t just describe how the place is, and which is the punishment for each sin: Inferno is populated with real people, mostly Florentine, but also Popes, Cardinals and more important historical characters that deserved to be there (in Dante’s opinion, of course). Recently, Dante’s Inferno became popular because of Dan Brown’s Inferno. In this novel by Dan Brown (2013), which unfolds in Florence for the most part, the protagonist, Robert Langdon, needs to decode a map: it’s Sandro Botticelli map of hell (click picture to enlarge), drew around 1495, when Dante’s Inferno was already a very famous epic poem.

Interested in the intriguing drawings by Botticelli representing Dante’s Inferno and all the Divine Comedy? Below is your chance to own your copy of these beautiful drawings:

Here are some day tours related to Dante’s Inferno: