Donatello’s Marzocco is a statue on display at the Bargello Museum, overlooked by most people. And I can’t say it’s in an unfortunate position because it stands exactly in the center of the most important room of the museum. The fact is that, unfortunately, that room displays such great works, like Donatello’s Bronze David, Verrocchio’s David, Donatello St George and the panels by Brunelleschi and Ghiberti that competed to be awarded the Baptistery North Doors, that it’s hard to focus on the statue of a lion. Furthermore, Donatello’s Marzocco is a statue in pietra serena, the typical sandstone of Florence, and its gray color doesn’t attract like bronze or shining marble.

That said, the Marzocco is an incredibly important work because it’s the artistic synthesis of the symbols of Florence: the lion and the red lily.

The symbology of Donatello’s Marzocco

Florence once was named Florentia: it was one of the many new towns founded after the 59 b.C. reformation by Julius Cesar. Not yet Emperor, but Consul of the Republic of Rome, with this act Julius Cesar promoted the redistribution of land to the veteran soldiers. Florentia, built by former legionaries, was consecrated to the God Mars, whose symbol was a lion.

During the Middle Ages Florence started to flourish, adopting a new symbol, the lily, which was used by the Florentine army in the first crusade, but didn’t forget about his origins: a lion was kept in a cage close to the Baptistery, and later another larger cage with more than twenty lions was placed behind Palazzo Vecchio, in the street that today is named via Dei Leoni (Lions Street).

Lions are everywhere in Florence if you look around: even in religious buildings, like for example in the decoration of Giotto’s Bell Tower, but a very large number of them is in Piazza Della Signoria: they adorn the entrance to the Loggia Dei Lanzi, the pillars of the same Loggia, and also the main entrance of Palazzo Vecchio. Then, in front of the palace, there is a copy of Donatello’s Marzocco. This (in front of the city hall), was the original location of the statue, which was moved inside in 1855. The copy doesn’t have luck either, overshadowed by the huge fountain of Neptune on one side and by Michelangelo’s David replica on the other side. Donatello’s Marzocco was executed between 1419 and 1420, originally to be placed in the apartment of Pope Martin V in the convent of Santa Maria Novella.

Only a genius like Donatello could join the two symbols of the city in what today would be considered a great logo. The lion is in a quiet stance, not aggressive: his front right paw is holding the red lily. It clearly is a warning, for any enemy of Florence. The lion (or the God Mars) is protecting this city. Since I consider this statue as the perfect symbol of Florence, I decided to change the logo of this website with a stylish Marzocco. Brunelleschi’s Dome (my current logo) is the most important monument, setting the skyline of the city, but the Marzocco better represent Florence and its history. Of course, my logo is not nearly as beautiful as Donatello’s Marzocco, but hey: it’s a logo, not a work commissioned by the Republic of Florence for the apartments of a Pope! You can preview my future logo here, it should be done in few days. I hope you like it. 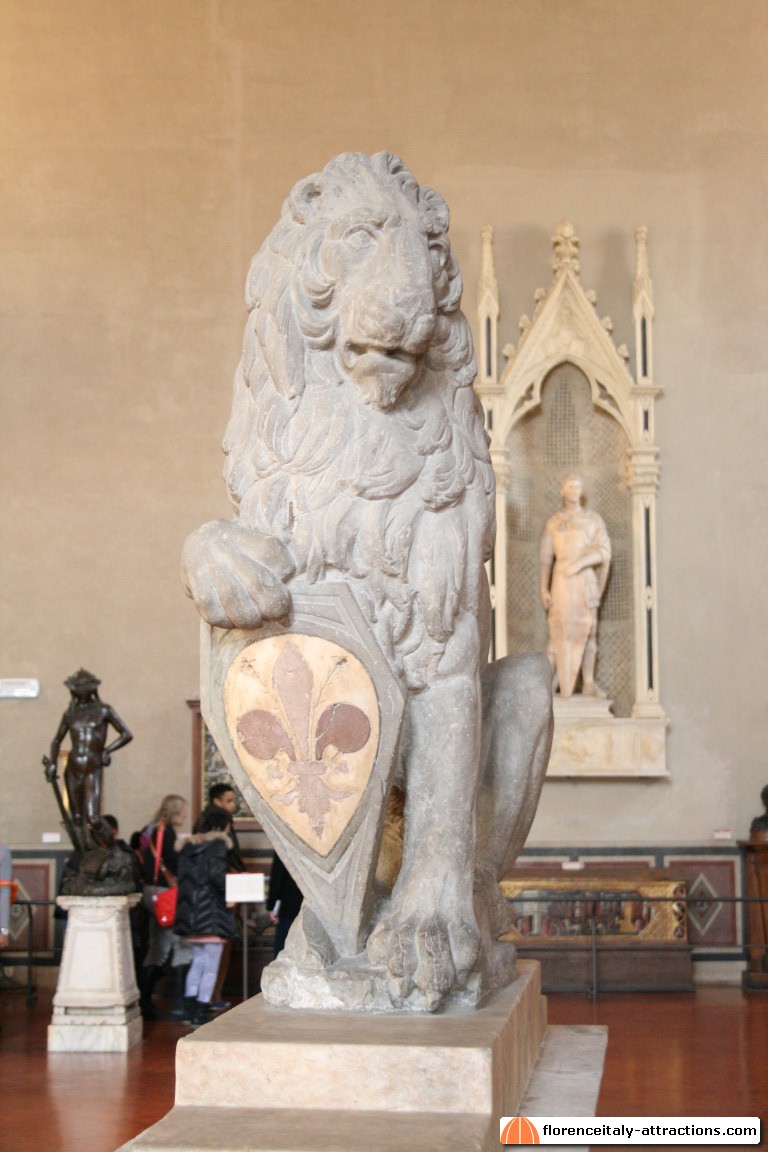