David, the prophet of the Old Testament, has always been considered a symbol for Florence because of his story, a triumph of intelligence over the brute force of Goliath, the giant. Many artists have represented David in history, including Donatello: he even did this twice. When speaking of Donatello’s David we must distinguish between the marble statue and the bronze statue, much more famous. Both statues are on display at the Bargello museum. Today we are going to analyze the bronze David. 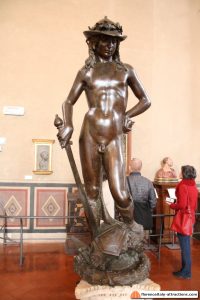 The most memorable variation of Donatello’s David would have to be the bronze sculpture that is in Florence, Italy. It’s supposed to depict David, and was created around the 1440’s era. It’s known as the very first unsupported standing work made out of bronze that man had known during the Renaissance, which is quite a feat considering the fact that they didn’t have the tools we do today. This particular bronze statue shows David as a youthful man with a positive spirit about him, and he’s got no clothes on at all. The naked nature of this statue has stirred up an abundance of controversy, but we’ll get into that a little later on. David has his foot on a defeated Goliath’s head, which has been removed from the body (David killed Goliath with a stone, then beheaded the giant). The only pieces of clothing present on the young hero would be the hat and boots he is wearing, as well as Goliath’s sword.

This bronze statue wasn’t very well-documented when it comes to the origins, it’s something that has left people scratching their heads. One theory would suggest that the Medici family had the entire project put together during the 1430’s, some believe that they were going to put it in the middle of the Medici Palace. Many changes in the location of the work characterize Donatello’s David history.  The thing is that the Medici family was banished from the city of Florence in 1494, so the statue, seized, had to take a trip on over to the “Palazzo Della Signoria”. The marble variation of Donatello’s David was already present at that location, so it seemed like the perfect fit. From there it was moved over to the “Palazzo Pitti” during the 17th century, and then to Uffizi in the year of 1777; the final move was in 1865, where it was taken to the “Museo Nazionale del Bargello”.

Many people deemed it as a controversial piece because it was never placed in the town hall of Florence, a trait that is usually only sported by works that aren’t exactly optimal for the general public. It’s stated that in the 16th century (early on in the years), the Herald of Signoria had some input regarding the subject. He had stated that the right leg of the statue itself was “tasteless”, a critique that would echo through the halls for all eternity. Although that was said, many people changed their toned regarding the statue as time passed. Vasari said that the statue was “so naturalistic that it must have been made from life itself”. Ever since then, numerous people have had an input regarding the statue, so just take it as you will! The beard that the severed head sports is curled around David’s foot, which is equipped with sandal-boots. Goliath is wearing a helmet, so even when he’s conquered it appears as if there’s an unstoppable aura about him. People interpret this statue in many different ways, so it’s probably best to come up with your own conclusion (some people even suggested there were some homosexual overtones at certain points in time). Certainly this is a work that speaks a sophisticated language, reserved to the Medici family and their restricted circle of scholars, philosophers and poets, and not a work to display in public. The Renaissance was a period when the cultural differences between the various levels of the Florentine society became very large, making it impossible for the common people to fully understand Donatello’s David meaning.