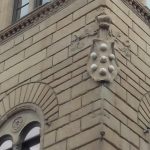 Palazzo Medici was the palace and residence of the Medici family. After Cosimo de’ Medici the Elder gave Michelozzo the order to build it in 1444 the Medici lived in the palace for almost a hundred years. The palace was then sold to the Riccardi family and that is why the name for the palace is now officially Palazzo Medici-Riccardi.

The palace has two floors around a courtyard with a high colonnade with statues dating from the 16th century. The palace has its own small chapel which is frescoed by Benozzo Gozzoli, and a garden which was originally described as containing plants and marble statues that where as beautifull like they where painted and not real.

Despite being the original residence of the most famous Florentine family in history, the Medici Palace is an overlooked attraction.

On the first floor is the richly decorated Luca Giordano room. This gallery was built by the Riccardi’s during the late 17th century. It has a ceiling with a fresco displaying the Apotheosis of the second Medici dynasty by Luca Giordano.

Famous artwork that is in Palazzo Medici-Riccardi

In the Palazzo Medici (Medici Palace) you can find pieces of art like:

The Palazzo Medici can be found at the following location:

Journey of the Magi – Benozzo Gozzoli

The chapel in Palazzo Medici-Riccardi houses one of the most famous frescos in Florence Italy. The order for the frescoes in the chapel of the palace were given by Piero di Cosimo de’ Medici to Benozzo Gozzoli, who worked with Ghiberti on the famous doors of heaven and was a brilliant artist. The order was to paint The Journey of the Magi to Bethlehem but to replace the magi by members of the Medici family situated in the Tuscan landscape. This gives us a great idea of what the Medici family looked at at that time, but it also gives us a good idea of what the political relations where with other states at that time because some of the political friends of the Medici family are also portrayed in the fresco. A very interesting display to say the least.