I recently wrote an article on the Oratorio di San Martino. If you click the link you will get more info on this overlooked Florence Italy attraction. Since I really want to promote this place, one of my favorites, today I’m going to show you the Ghirlandaio frescoes inside the Oratorio.

Ghirlandaio frescoes in the Oratorio

Ghirlandaio frescoes in the Oratorio di San Martino were made in collaboration with his workshop. Probably Ghirlandaio just made the drawings and some difficult parts like faces and hands. Part of the frescoes illustrate the actions of the Buonomini di san Martino, the charity organization that owns the Oratorio (even today). Their activities were inspired to the Seven Works of Mercy (also known as Seven Acts of Mercy) of the Catholic belief. Actually, the Works are split in two categories, each one counts seven Works: corporal and spiritual. What’s represented in the frescoes is the Seven Corporal Works of Mercy. Actually it’s six frescoes, because one of them represents two Works. Click thumbnails to enlarge. 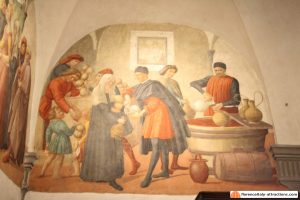 To feed the hungry and To give drink to the thirsty 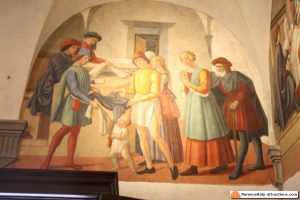 To clothe the naked 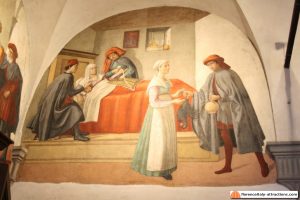 To visit the sick 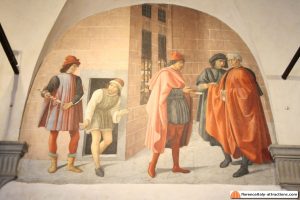 To ransom the captive 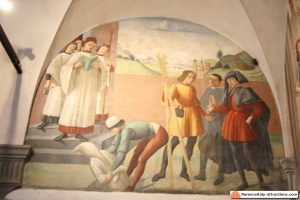 To bury the dead 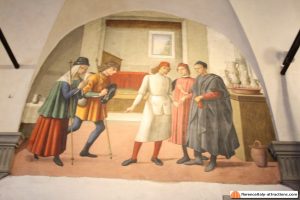 In all these Ghirlandaio frescoes we see the Buonomini, often (not always) identified by a red hat, providing the mentioned services (paying someone else or superintending the work).

Two more activities of the Buonomini are represented in Ghirlandaio frescoes: 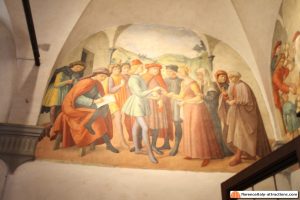 Contract of Matrimony: one of the charity works by the Buonuomini was to provide a dowry to poor/orphaned women. With no dowry, it was impossible to find a husband, since the matrimony was a contract between two families. The Buonomini provided an amount of money plus legal assistance to close the contract with the family of the future husband. 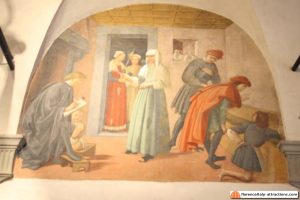 Inventory: the Buonomini were regarded as the “Angels of Florence” (so defined by Pope Eugenius IV), many people made donations or left something to the company in their testament. 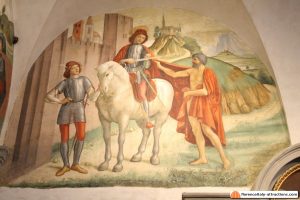 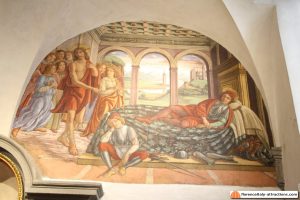 Jesus Christ appears to Saint Martin of Tours in a dream, wearing his cloak.

These frescoes are not just a great example of Renaissance painting style, but also tell us a lot about the daily life in Florence during the late 15th century, illustrating clothing, furniture, tools and architectures.