Greve in Chianti (which was just referred to as “Greve” in previous times) is a village that is located close to Florence, Italy. The name was changed in the year of 1972, where they began to refer to themselves as “Greve in Chianti”. It’s only about 31 kilometers south of Florence itself. It’s a village that is well known for the wines that it can produce, and that’s why so many people go on wine-tasting tours here. It’s one of the quietest towns you’re going to come across, even though many people know about it these days; this is mainly due to the fact that it’s off the “well-beaten path”.

If you wanted to relax in a quaint little village, this would be the place to do it. In the ancient days of Tuscany, this village wasn’t actually that isolated. There was a set of secondary roads that connected this village to the Via Volterrana, as well as the Via Francigena. These days, it’s connected to the A1 highway (but not too close to it), which is between Rome and Florence; the old network of roads was supposed to allow seamless trips to Figline and such. There were many traders and merchants over in Figline, which is why it was so crucial to make sure that people could make a connection (whenever it was applicable, of course). In the end, this village has a lot of different things going for it.

The Main Attractions in Greve in Chianti 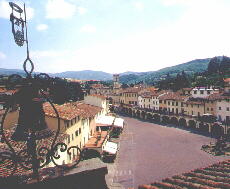 Like stated previously, people flock to this village to taste the wine, as they’ve got a rather large selection to choose from (regardless of where you decide to drink it in Greve). There is a Franciscan monastery located in the very center of the city, where there’s a triangle-shaped piazza. There’s a large market running inside of there, and it’s been continuously going for a few centuries now. The piazza itself has tons of old buildings surrounding it, which is why it’s such a beautiful sight to see. The 11th-century Santa Croce building is one of the most popular ones, as it was rebuilt during the year of 1325 after it was completely burnt down to the ground. The rest of the town was destroyed by a fire too, and it was at the hands of Duke of Lucca – Castruccio Castracani.

The church (which has been renovated numerous times) now sports a neo-classical type of vibe. The piazza has a monument to Giovanni da Verrazzano as well, whom is a very famous Italian navigator (and was born nearby). Most works that have been recently published refer to his birthplace as “Lyon France”, but it’s still up for debate. The castle of Verrazzano stands about 348 meters (1,142 feet) high, and is only about 2 kilometers away from the city center. Most people believe that the Longobards were responsible for building it, and was converted into a villa during the 17th century.