How did the Renaissance start?

The Renaissance is the foundation of the Western culture and of course it has been analyzed in detail for centuries. It originates from the Humanism, a new philosophy that started to be dominant in Italy in the 14th century. This is a blog on Florence and arts, so I’m more interested in understanding: how did the Renaissance start in arts? At least until the 19th century, arts followed the taste and goal of rich patrons: be it an Egyptian Pharaoh, a Roman Emperor or the Catholic Church. It was the same in Florence in the early 15th century, the difference being that rich patrons were much more similar to what we are today: that’s why we recognize our identity in this artistic trend. Renaissance in arts certainly started as a process, but there actually was a break-out point in the evolution of arts.

How did the Renaissance start? We can say that Giotto (1267-1337) started the process. Giotto was the most famous artist in Florence in the early 14th century. He learnt the art of painting from Cimabue, or at least this is what Vasari says in his Lives. And, after learning, he made a revolution: 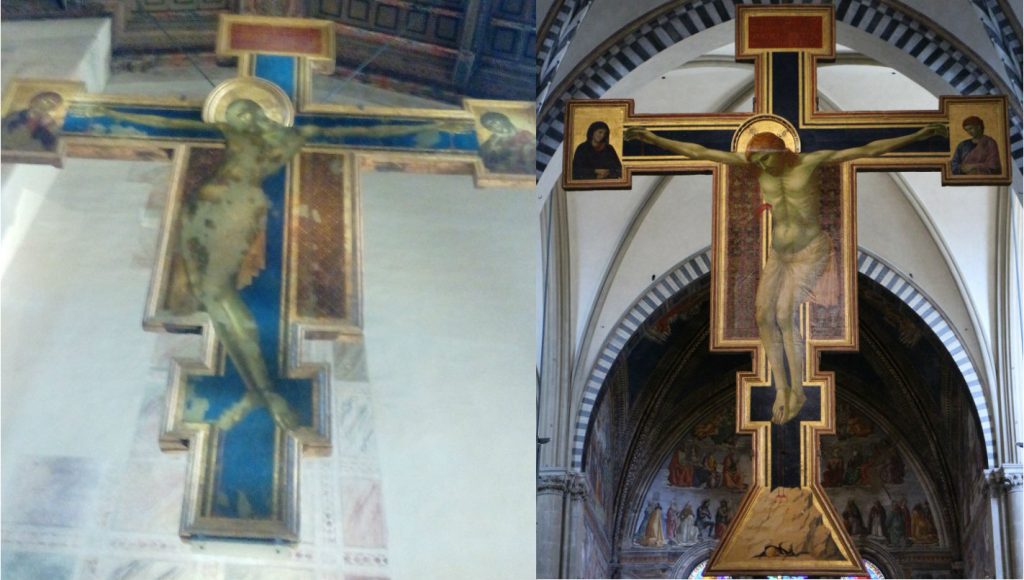 On the left, a painted cross by Cimabue (1280c, Basilica di Santa Croce), on the right a painted cross by Giotto (1290c Basilica di Santa Maria Novella). The painted cross by Cimabue was heavily damaged by the Arno River flood in 1966, but can you see the difference? On the left a religious symbol… on the right, a man crucified, whose weight and stretched muscles are realistically represented. Giotto started the process, but an event happened that led to an abrupt termination of his experiments: the plague. Between 1348 and 1351, the black death devastated Florence, already in an economic crisis. Killing between one third and half the population, the plague was considered a punishment by God, or better, this the theory the church decided to support. Apart for the lack of funds for works of art, innovation was considered dangerous for a while, and the Renaissance was delayed by several decades. Without the plague, probably Giotto would be considered the starter of the Renaissance. Many scholars think the plague paved the way to the Renaissance: I just think it stopped the normal evolution of arts and the Renaissance appeared 50 years later as a sharp break of the Gothic tradition. I think we would have gotten there anyway, but with a smooth transition. 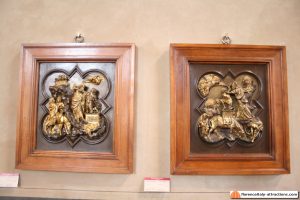 Still interested in knowing how did the Renaissance start? It started with the competition for the Baptistery doors. And yes, they were made to thank God for the end of the plague. The Baptistery of San Giovanni has three entrances, and only one had a beautiful bronze door, made by Andrea Pisano (1300-1333). The Merchants Guild, responsible for maintaining the monument, decided to add a second set of bronze doors in 1401 and, to choose the artist, they held a competition: they gave each artist a fixed amount of bronze to create a bas-relief panel, enclosed in a Gothic frame, representing the sacrifice of Isaac. The doors had to be made of 28 panels like this, representing stories of the Old Testament. There were seven competitors, and the two finalists were Filippo Brunelleschi and Lorenzo Ghiberti. Luckily, the Merchants Guild changed the subject of the door from Old to New Testament, and we still have the two finalist panels. If you click to enlarge the picture, you can see the panel by Lorenzo Ghiberti on the left, and the panel by Filippo Brunelleschi on the right. You will notice how the panel by Ghiberti is very elegant and theatrical, symbolically representing the solemnity of the moment, with an angel appearing in the sky to announce the good news. The panel by Brunelleschi instead tries to catch the human side of the story: the feelings of a father going to kill his son are well visible in the schocked face of Abraham and here the angel has to materially stop him from fatally stabbing Isaac. These panels were never used for the door, as I said before, and it’s incredible how the Florentine decided to preserve them, given that bronze was very expensive. Even though the competition was won by Ghiberti for his superior ability in casting bronze, they understood the importance of the panel by Brunelleschi, that represented something completely new.

Do you want to see the panels and understand how did the Renaissance start? You don’t have to go to the Baptistery but to the Bargello museum. Do you want to see the doors by Ghiberti? These aren’t the most famous Baptistery doors, known as the “gates of Paradise”. It’s the Northern doors, today the entrance to the Baptistery. The original doors are currently under restoration and you have to wait until November 2015, when the Opera del Duomo Museum will open again.