Certainly Dan Brown’s novel Inferno created the conditions for more tourism in Florence. Since the book was out, in May 2013, more and more people are interested in Inferno Florence locations and tours, and most probably this trend will skyrocket when the film by Ron Howard, with Tom Hanks as professor Robert Langdon, will be ready (December 2015). I personally performed many Florence Inferno tours, which I found very interesting also because they include overlooked attractions. Let’s see in detail the Inferno Florence locations.

A man, chased at night, crosses Ponte Vecchio to get to Piazza della Signoria, then he escapes through the tight Medieval streets, enters in a monastery, climbs the bell tower and suicides. The monastery is the beautiful Badia Fiorentina. I couldn’t identify the Hospital where Robert Langdon wakes up: the only clue we have is that the tower of Palazzo Vecchio is visible from a window of the Hospital and this made me think of Santa Maria Nuova, an ancient hospital in the heart of Florence, but from there Palazzo Vecchio is not visible. The Art school where Langdon and Sienna hide before finding a way to climb the wall and enter in the Boboli Gardens exists and, in theory, you can actually get inside the Boboli Gardens climbing the wall. 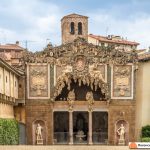 This is the first attraction described in detail by Robert Langdon in the book. The two fugitives are running, chased by a drone, and use the trees to hide from the camera. It’s a rush that ends in the grotto of Buontalenti. The wonderful grotto is actually closed (but Langdon finds it open of course). Robert and Sienna hide in the third and last room of the grotto and they are almost caught. Saved by a phone call that drives the chaser out, they exit the grotto and knock a door. You can see the door on the left of the grotto if you click to enlarge the picture.

The door actually is the exit of the Vasari Corridor, and if you knock that door, nobody will answer. There is no guardian there, opening the door to be immobilized by Sienna. Whatever, Robert and Sienna enter in the Vasari Corridor, and run through. This way they cross the Arno river, just above Ponte Vecchio, and get to the Uffizi Gallery. Ultimately, their destination is Palazzo Vecchio, where Langdon wants to see a fresco by Vasari. Of course, this is totally impossible to do. In the Vasari Corridor they would find a lot of closed gates, they would trigger many alerts, especially when entering the Uffizi, and also: between the Uffizi and Palazzo Vecchio there are two doors, always closed. Among the Inferno Florence locations, this is the most requested by tourists.

Here is where most of the action takes place. Langdon finally finds the “hidden message” in Vasari’s Battle of Marciano, and connects it to the death mask of Dante Alighieri, also on display in Palazzo Vecchio. Dan Brown, who has been in Palazzo Vecchio several times while writing the novel, adapted the architecture of the palace to help Langdon escape. He uses three existing secret passages, with the protagonist going from one to another. All these passages exist, but you can’t go through all of them from one place: they’re in different parts of the palace. It is possible to visit the secret passages, they’re really interesting. Contact us to get more info on this.

House and church of Dante 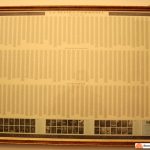 This part of the book is funny. Langdon needs to find what’s written in part 25 of Dante’s Paradise and he wants to go to Dante’s House Museum where the bookshop sells posters with the entire poem (click the picture to enlarge). The funny fact is that when I say this, teenagers immediately reply: “why not Google that?”. Langdon will ultimately get to the same conclusion after some time. Since Dante’s House Museum is closed, he tries in Dante’s church. The church is well described, but confused with another church when saying that it’s used for concerts. Finally, using an Iphone kindly provided by an American tourists, Langdon can read Dante’s Comedy and understand where he needs to go. The last of the Inferno Florence locations is the Baptistery of San Giovanni.

During the short run from Dante’s church to the Baptistery, Langdon well describes Florence Duomo. The Baptistery is closed at that time, but they know the famous doors (the gates of Paradise) have been left open. The problem is, there is always a crowd in front of the doors, and there is a gate in front of them. The two fugitives use an impossible trick, screaming that someone is jumping from the Bell Tower, so that everybody turn their head and they can climb the gate and enter in the Baptistery. Here they find the next clue that leads them to Venice.

Here is a map with Inferno Florence locations. Would you like a story telling tour to visit all these places with an expert tourist guide? Contact us, we can arrange any Inferno tour, including all the secret passages!