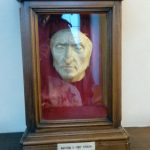 Florence Italy is famous worldwide and we already have an average of 4.5 million tourist visiting the city in the recent years. The novel Inferno by Dan Brown fueled this already rich tourism, especially for the attractions involved in the novel, but this is nothing if compared to what will happen after the Inferno movie debut, scheduled in 2016. Ron Howard, director of “The Da Vinci Code” and “Angels and Demons”, and Tom Hanks, interpreting Robert Langdon, will be in Florence at the end of April 2015, starting to film what we all hope will be another blockbuster movie.

Dan Brown came to Florence several times while writing his latest novel. He wanted to know every detail about Palazzo Vecchio secret passages, which are an important part of his book. The novel, in bookshops since May 2013, was officially presented in the Hall of the 500. Ron Howard was here already in October 2014, to see the Inferno locations. Staying at the Four Seasons Hotel, the famous director asked for a tourist guide to be shown the Boboli Gardens and other Inferno locations. Unfortunately, the hotel didn’t call me but a colleague, and I had to spend hours on the phone, summarizing the book that she didn’t read! Things were made accurately, and I have no doubt that Inferno movie will be a success. 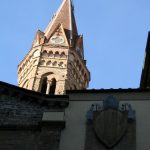 Ron Howard and Tom Hanks will film Inferno movie in late April/early May in Florence. The shooting of the film, a new chapter of the saga of Robert Langdon, will then move to two different locations: in Istanbul and again in Italy, this time in Venice.
Felicity Jones, Irrfan Khan, Omar Sy, Sidse Babett Knudsen and Ben Foster joined Hanks in this third episode, in which Langdon wakes up in a hospital where he discovered that he had temporarily lost his memory due to some mysterious trauma. With Dr. Sienna Brooks (Felicity Jones), he will try to prevent a deadly virus to spread the world. Florence, hit by the black death in 1348, was certainly the perfect location to set the stage for such a criminal plan.
Ron Howard in his Facebook page has also posted photos of the behind the scenes of Inferno movie that concerns the design of the opening scene, set in the Badia Fiorentina, where a mysterious character in the book of Brown jumps from the Bell Tower …

Among the Florence Italy attractions that will be involved in the filming, Palazzo Vecchio, the Baptistery, the Uffizi Gallery, the Vasari Corridor and the Boboli Gardens. Because of this, some museums will be closed. So far, we have official news that the Vasari Corridor will be closed on May 10th and 11th. I will update the article as soon as I have more news on the other attractions involved.