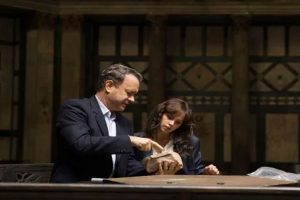 It’s official. The Inferno premiere will happen in the city where most of the film (and the novel by Dan Brown) unfolds: Florence.

Ron Howard, the director, Tom Hanks, the protagonist, and all the crew will be here for the premiere event which will happen on October 6th, 2016. The city of Florence will enjoy a worldwide preview for three days, from October 6th to October 8th. Everywhere else, the film will be released on October 16th.

The film by Ron Howard is inspired to the novel by Dan Brown and it is a follow up of “The Da Vinci Code” and “Angels and Demons”, going to complete a trilogy.

This time, professor Robert Langdon will have to avoid a bio-terrorist attack, while chased by a killer through Florence, Venice and Istanbul. Ron Howard was here to shoot the film in April-May 2015. It was a great experience for the famous director: he received the citizenship of Florence by the mayor in person. The initial release date, set for December 2015, was delayed to October 2016 to avoid competition with Star Wars Episode VII.

For now, you can watch the official trailer:

In the meantime, in Florence, the Inferno tours are becoming more and more popular: the novel describes amazing places that can be visited in Florence, like the Boboli Gardens, the Vasari Corridor, The Uffizi, Palazzo Vecchio (which is the main set) and the Baptistery. Most probably, after the Inferno premiere, the tours will become even more popular: the film, even more than the novel, will be a great promotion for the city. There are many Inferno tours in Florence, you can either join a group (saving money) or go for a private experience, more interactive, with the guide at your disposal:

Inferno tours in Venice and Istanbul

For a complete Inferno experience, you should visit all the Inferno places. Here are some suggestions on the tours in Venice and Istanbul, the two other cities you will see in the film: