Many extras on this occasion: over 400 participated to the Inferno shooting. Many scenes dedicated to external action and filming focused on exciting actions and car pursuits: in all likelihood these are the scenes relating to that part of the movie set in front of the apartment of the young doctor Sienna Brooks, played by Felicity Jones.

For selecting places, the troupe collaborated with the Tuscany Film Commission, and the Museo Marino Marini gave his availability to be used by the cast and crew.

The actress who will play the ‘bad’, in the film with the name Vayentha was present to the shooting. Today they will still be filming in Florence, always in the city center, before flying to Istanbul and Budapest.

As a curiosity, an ice-cream shop in Florence is proposing a new taste called “Inferno”: based on chocolate with hot pepper, it’s going to be a success.

Here in Florence we all wish the best to our new fellow citizen Ron Howard and his new creation. Apparently the director liked us as well! 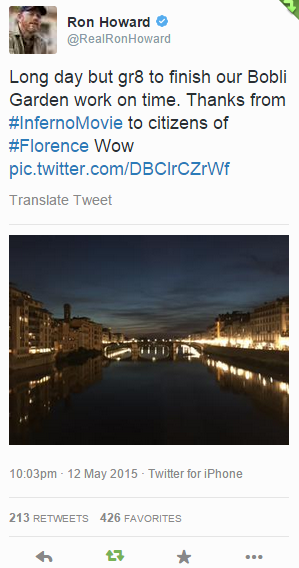 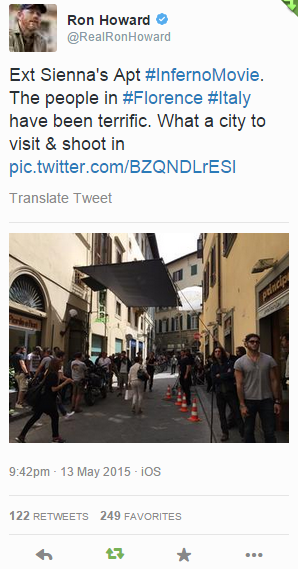