When walking through the rooms of the Uffizi Gallery, it’s not easy to find a painter who was not born in Tuscany. The first big name comes in room 15, a room where everybody stops to see the Annunciation by Leonardo Da Vinci, but that also contains the works of Perugino.

The Life of Perugino: A Short Biography 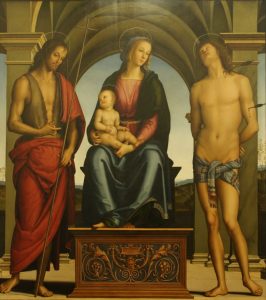 Pietro Perugino was a Renaissance painter of Italian descent, he attended the Umbrian school that actually helped develop the expressions people would have during the High Renaissance. He was born in the year of 1446, and he passed away during the year of 1523. He had a pupil named Raphael Sanzio, who was quite famous in his own right; but this article is going to focus on Pietro himself. He was actually born as Pietro Vannucci in the region of Citta della Pieve, hence why he decided to attend the Umbrian school. He was born to Cristoforo Vannucci, and regardless of what his personal biographer Giorgio Vasari stated, the Vannucci family was one of the richest in the city.

Nobody knows exactly when he was born, but according to his death and the details surrounding it, it’s said that he was born around the years of 1446 and 1452. It’s a 6-year time frame to take into consideration,  but it’s better than nothing. Odds are that Perugino started off his life journey in the city workshops, some of the more common ones would be Bartolomeo Coporali’s or even Fiorenzo di Lorenzo’s workshop. Vasari stated that Perugino had an apprenticeship in the workshops of Andrea del Verrocchio, he did so with the likes of Leonardo da Vinci and Lorenzo di Credi (all of which are incredibly amazing artists of their time). Piero della Francesca is supposedly the source of his perspective skills, because the perspective form wasn’t something Perugino tried to incorporate before they were in contact.

It’s stated that he had completed his apprenticeship by 1472, because he had started his courses within the Confraternity of St. Luke; he had actually enrolled as a master. Perugino is one of the earliest practitioners when it comes to oil painting, and some would say that he’s the pioneer behind the entire oil paint movement. The early works that he was putting out were frescoes with an intense amount of details, all of which were for the covenant of the Ingessati fathers. These works were destroyed during the siege of Florence. He painted a self-portrait during the year of 1494, which can now be seen if you go to the Uffizi Gallery.

He painted his very last frescoes for the Madonna delle Lacrime church, located in Trevi (during the year of 1521). These last pieces of art were actually signed and dated by Perugino himself, so the dates are as accurate as possible. He passed away due to complications from the plague, and he was treated like any other plague victim when it came to his burial. They buried him quickly in the middle of a random field, so his place of burial isn’t exactly known at this time (nor will it ever be at this point). Vasari stated that Perugino wasn’t very into religion, which is strange considering the fact that he worked on so many commissions for churches and such.