Lucrezia Tornabuoni, born in 1425, was part of the important Tornabuoni family, a family allied with the Medici. In 1432-33, when Cosimo The Elder was banned from Florence, the Tornabuoni helped Cosimo to come back. Lucrezia, unlike many women in her age, was in condition to study and had a large culture. She was a poetess by hobby. Most of the news on Lucrezia Tornabuoni come for the many letters she wrote, that were preserved until today and give us an idea about her personality; these letters also show us how Lucrezia Tornabuoni was very far from the stereotype of the Medieval wife. She had an active role in the life of the family and her thoughts were taken in high consideration by her husband.

The marriage of Lucrezia Tornabuoni

The alliance between Tornabuoni and Medici family was officially sealed with the marriage between Piero The Gouty and Lucrezia Tornabuoni in 1444. At that time, the Medici were rulers of Florence already, so the Tornabuoni won a jackpot with this marriage! Lucrezia was a good mother for his four children Lorenzo, Bianca, Lucrezia (Nannina) and Giuliano and also for the illegitimate daughter of Piero, Maria. She was worried to give her children top class teachers, which was fundamental for her son Lorenzo de Medici in reaching the status of Renaissance man. At that time, Palazzo Medici was already filled with an entourage of poets, philosophers and artists. Lucrezia had an important role in the marriage of Lorenzo in particular: the Medici had reached such a status that everybody in Florence wanted their daughters to become Lorenzo’s wife. Following their smart methods, the Medici didn’t want to make anybody unhappy, and decided to find a wife for Lorenzo elsewhere. Also, not being a noble family, they aimed at elevating their status in regards of the other important Italian families, who ruled their own cities with official titles like Dukes or Kings. It was all on Lucrezia’s shoulders, because Piero, busy with internal affairs and in bad health conditions, couldn’t leave the city. Lucrezia traveled to Rome, was accepted at the Roman courts, examined the potential candidates and negotiated the marriage, sending frequent letters to her husband. I made a free English translation of part of one of these letters, written in Renaissance Florentine language, not easy to understand even for a Tuscan like me. In this letter, Lucrezia describes Clarice Orsini, the woman that will actually become her daughter-in-law:

“…[Clarice] arrived, and she wore a tight skirt in Roman style, and without veil: and we stayed a lot of time talking: and I thought a lot about this girl. She is, as I was saying, large enough [speaking of her hips], and white [skin], and she is so polite, not as polite as our [daughters]: but very humble, to be quickly reduced to our habits. She’s not blonde, because there’s no blondes here [in Rome]: her hair gets toward red, and she has a lot of hair. Her face is a bit rounded, but I don’t dislike it. The neck [movement] is fast but looks to me a bit thin, or better, a bit delicate. I couldn’t see the breast, because [in Rome] they all shut themselves up; but it shows good quality. She walks with her head not as daring as our [daughters], but appears as she keeps it a bit sloping: and I think this happened because she felt embarassed; for I can’t see any sign in her, other than she’s staying embarassed. She has long and fast hands. All in all, we find the girl more than fair; but not to be compared to Maria, Bianca and Lucrezia [Lucrezia’s daughters]….”

Later in the same letter, Lucrezia Tornabuoni makes a list of the possessions of the Orsini family, revealing her merchant mentality. The marriage between Lorenzo de Medici and Clarice Orsini was decisive to have alliances in Rome, which led Giovanni de Medici, Lorenzo’s son, to the office of Cardinal; Giovanni some years later was elected Pope Leo X.

We have 49 letters by Lucrezia Tornabuoni, precious to spot the conditions of women in Renaissance Florence and the mundane life of the city, but also about her charity initiatives: Lucrezia was responsible for the charity efforts of the Medici family and distributed funds also to convents for women and women without a dowry; increasing the popular consensus was crucial for the unofficial rulers of Florence. We also have some works by Lucrezia Tornabuoni as poetess: holy poems and lauds. Lucrezia Tornabuoni witnessed the Pazzi conspiracy, where her son Giuliano de Medici was killed, and firmly stayed close to Lorenzo to help him in the days after the plot. Lucrezia Tornabuoni died in 1482. There are many portraits of Lucrezia made by the best artists of the Renaissance, in particular Domenico del Ghirlandaio, who represented Lucrezia multiple times in the Tornabuoni Chapel frescoes inside Santa Maria Novella. 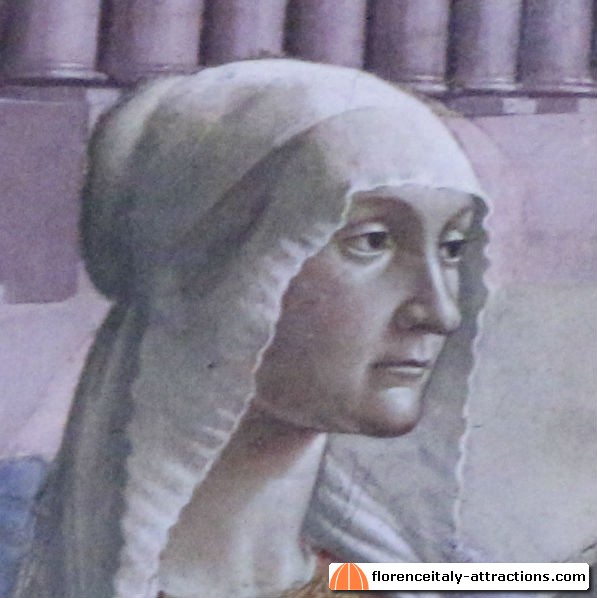