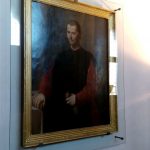 Niccolò Machiavelli was born in Florence in 1469. He was a politician, writer, philosopher and historian. His father was a small merchant, interested in politics. Machiavelli started studying at the age of seven, focusing on Latin works and some ancient Greek work translated into Latin. His childhood was spent in the most fluorishing period of Renaissance Florence, with the Medici family, in the person of Lorenzo The Magnificent, ruling the town, sponsoring amazing artworks and, most importantly, keeping peace in Italy. At that time, Florence was the most important city of the Western world.

The death of Lorenzo de Medici 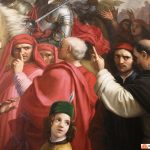 The “Magnificent” had been a great ruler, loved by most people, but there was a growing embarassment when he died at just 43, in 1492. The fortunes of the Medici were fading quickly and Piero “The Unfortunate”, son of Lorenzo, didn’t have the same political abilities. Peace, cleverly maintained by Lorenzo, was in big danger and soon enough the King of France Charles VIII invaded Italy. Traditionally allied of Florence, France conquered the fortress of Sarzana and Pisa turned against the Republic of Florence. Piero de Medici, unable to avoid war, was banned from the city, Palazzo Medici was sacked and Florence became a Catholic dictature ruled by Girolamo Savonarola, a Dominican friar who had a lot of popular consensus, having been the voice against the corruption of the Medici. We have a painting in the Modern Art Gallery in Pitti Palace, showing the entrance of Charles VIII in Florence: the particular in the picture shows a group of Florentines discussing what to do. On the left is Machiavelli, on the right Girolamo Savonarola.

The rule of Savonarola lasted for four years. Machiavelli, already a politician, opposed to the friar, even in written form. Quite dangerous, considering how many people were condemned to death by the dictator. After an initial support for Savonarola by the lower classes, tired to see the Medici and their friends getting richer with corruption, consensus started to fade for the friar: the bonfires where people had to burn any symbol of corruption, including “blasphemous” books and artwork, certainly didn’t raise the spirits. A city once symbol of luxury lived in [forced] silence and prayer. The end for Savonarola was when Pope Alexander VI excommunicated the city of Florence. This authorized any debtor of any Florentine bank not to give his debt back. Of course, the consensus disappeared as fast as it created some years before, and Savonarola was condemned to death as heretic.

For the following years Florence, for a short while, will be a free Republic, with no ruler whatsoever. A magnificent period where the Renaissance in Florence will reach his very top. Machiavelli, elected chancelor of the Republic, witnessed an incredible production of countless amazing works of art: Michelangelo’s David, the Monna Lisa by Leonardo da Vinci, the Madonna and goldfinch by Raphael. Should I continue? I guess I catched your attention with this short list. Apparently fluorishing inside, the Republic of Florence had many problems outside. The Italian wars were underway and I do not hesitate to point at Machiavelli as a fine diplomat, who traveled across all of Italy and Europe in order to preserve the freedom of his own city. Never in history an ambassador had to deal with so many threats and it’s a miracle and a big praise to Niccolò Machiavelli if the free Republic of Florence survived so long, surrounded by enemies, and even conquered back the city of Pisa.

The Medici strike back

With French troops abandoning Italy, Florence, left with no protection, fell to the troops of the Papal state helping the Medici to come back. Many republican were condemned to death and Machiavelli was arrested and tortured. In 1513, Cardinal Giovanni de Medici is elected Pope Leo X, consolidating the power of the family on Florence but also avoiding any risk of more wars against the city. Machiavelli benefited from the amnesty, but even though he tried to offer his services to the Medici, he was still considered an enemy by the ruling family, so he retired in the countryside. 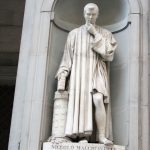 Since he couldn’t be a politician anymore, writing became Machiavelli’s main job. His most famous work, The Prince, dedicated to Lorenzo de Medici Duke of Urbino and inspired to Cesare Borgia, is a sort of manual of instructions for the “wanna be” Signore, with suggestions on how to take the power and how to subsequently keep the power. In Machiavelli’s view, history is where the Signore has to find inspiration, and  the book is filled with historical examples. Because of this book, Machiavelli is considered as the father of the modern politics: he reveals a pragmatic view which sacrifices ethic and ideals, mostly misunderstood today. Machiavelli was just writing, black on white, what he observed in years of politics. It was nothing new actually, and the judgement on his teachings, often negative, in my opinion is just hypocrite. The word machiavellian today defines a smart but often negative behaviour, and the most famous of the Machiavelli quotes is: “the goal justify the means”, something he never said or wrote, as far as we know.