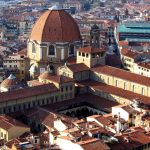 What most identify as the Medici Chapel would be correctly the Medici Chapels (Cappelle Medicee), being two different structures added to the San Lorenzo Basilica in different centuries. The first one is the New Sacristy (Sagrestia Nuova), added by Michelangelo in the first half of the 16th century, the second one is the Cappella dei Principi, started in the 17th century. Hard to imagine two structures as different as these two, with the New Sacristy being an example of Renaissance architecture, simple and sober, while the Cappella dei Principi is heavily decorated in Baroque style. At the same time, it’s very hard to find two different structures which are as beautiful as these, moreso because they were both made to celebrate the same family. Today the Medici Chapel is a state museum, separated from the church of San Lorenzo; it’s one of the most amazing Florence Italy attractions, incredibly overlooked by most tourists.

Famous artwork in the Medici Chapel

Look at this video on the Medici Chapel:

The Medici Chapel can be found at this location: 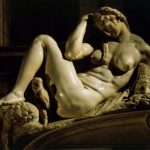 Of the seven statues made by Michelangelo for the Medici tombs, Night is certainly the most beautiful. The master represents night as a sleeping woman, in an “impossible” position and with a male body (except for the breast). The marble is finely polished to represent the skin shining at the moonlight. Objects related to night lay close to the woman, like a mask (representing the dreams or nightmares), an owl and a cornucopia. Although being a masterpiece per se, this is an enigmatic work by Michelangelo that you can really understand only being right there in the Medici Chapel. So what are you waiting for?