On top of the Medici family tree 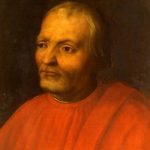 In any Medici family tree, you’ll see a man on top: Giovanni di Bicci. We have news about his ancestors, several generations back, starting from Medico di Potrone (1046-1102), but all the news until the second half of the 14th century are incomplete. Also, the Medici family was not really important in Florence Italy, until they became incredibly rich with their banking activity: this is why Giovanni di Bicci is considered the ancestor of the family: because he’s the man who started the banking activity. On top of this, he had two sons who originated the two branches of the Medici family: the bankers and popes, including the first Duke of Florence, who died out in 1537, and the Grand Dukes of Tuscany, who continued to rule Florence until 1737.

Giovanni di Bicci de Medici was born around 1360, and looks like his inheritance, split with brothers, was not a lot. Certainly the Medici were not starving to death, but they were just one of the many families of merchants in Florence. Giovanni di Bicci was a great businessman. He started the Medici banking activity, in a period when Florence was facing a huge crisis: back in 1346, the main banks had gone bankrupt when the King of England didn’t pay back his debt, few years later the city was devastated by the plague. This situation was perfect for creating new fortunes, and Giovanni revealed the most skillful of the Florentine bankers. Soon enough, his company was a multinational bank. A huge boost to his banking activities came in 1410, when Giovanni di Bicci sponsored the campaign of Baldassarre Cossa for the Papacy. The Pope granted the Medici the benefit of becoming the official bank of the Papacy, which gave the family a great power. On top of this, the Medici also received the monopoly on the alum mines. Alum was necessary to dye fabric, the main product of Florence.  Now you know why Baldassarre Cossa is buried in the Baptistery of Florence, in a beautiful tomb paid by the Medici!

Giovanni did not rule Florence: he wasn’t very interested in politics and even though he was part of the oligarchy and was often elected to public offices, most of the times he refused, preferring to pay a fine. Giovanni di Bicci married Piccarda Bueri, a woman coming from an ancient noble family, and they had two sons: Cosimo and Lorenzo. When Giovanni di Bicci died in 1418, the firstborn Cosimo de Medici inherited the banking activity and the Medici family was well established in the top five richest families in Florence.

Giovanni di Bicci started a tradition that will be continued by all the members of the family: being a patron. His name is linked to two great attractions in Florence. The Spedale degli Innocenti, one of the first orphanages in Europe, and the Sagrestia Vecchia inside San Lorenzo church. Both works were given to Filippo Brunelleschi, the genius considered as the man who started the Italian Renaissance, who became famous later, raising the dome of the Cathedral. The Sagrestia Vecchia is also the burial place of Giovanni di Bicci and his wife Piccarda Bueri. Their bodies lie in a sarcophagus in the center of the room. 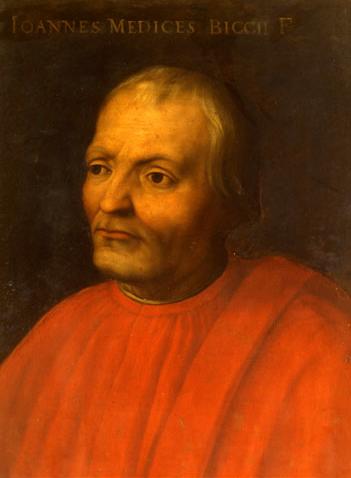