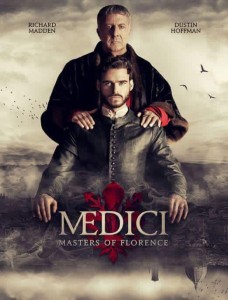 It’s very hard not to be excited in Florence, lately. Just a few days ago I wrote about the Inferno premiere, and here I am again. It’s official: the worldwide Medici Masters of Florence premiere is also set in Florence, at Palazzo Vecchio, on October 14th, 2016, just 8 days after Inferno.

“Medici: Masters of Florence” is an Italian-American TV series co-produced by Lux Vide and Big Lights Productions. Season one will have 8 episodes and will be focused on the rise of the Medici family, with Giovanni di Bicci, founder of the Medici Bank, interpreted by the Academi Award winner Dustin Hoffman, and his son Cosimo interpreted by Richard Madden (Game of Thrones).

The TV series has already been renewed for a season two, with 8 more episodes that will focus on the life of Lorenzo de Medici, “the Magnificent”, arguably the most famous of his family.

The series has been filmed one year ago in Florence and other locations in Tuscany and Lazio, and it’s the first time you will see a story about the famous Renaissance family filmed in the actual places and not in a made up set.

Medici Masters of Florence premiere in other countries

We have no precise news about the Medici Masters of Florence premiere in the other EU countries, North America and Australia. We will update as soon as possible, this is what we know so far:

The premiere dates have not been released, but maybe you can get informed on the official websites of the listed channels.

Get ready for Medici Masters of Florence

Here are my suggestinons for a good book and a beautiful documentary on DVD by PBS:

Of course, if you are planning a trip to Florence, Italy, you can watch some live shows about the Medici:

Finally, you can join tours of the Medici places: