There is an abundant literature for any work by Michelangelo Buonarroti, but one of them still remains a mystery, since we don’t even know what it represents. It’s Michelangelo Apollo David, and unfinished work on display at the Bargello Museum. 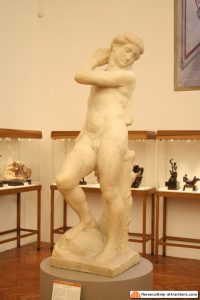 Michelangelo was carving the statue for Baccio Valori, who had been appointed as governor of Florence by Pope Clement VII de Medici in 1530, after the Medici and their allies had finally defeated the Florentine republic. Having sided with the Republicans, Michelangelo was trying to make peace with the Medici. One way to achieve the goal was pleasing Valori, for who the artist worked on this sculpture and the design of a building. Michelangelo Apollo David was almost completed before leaving Florence, without never returning, after the death of Clement VII, his supporter and protector, in 1534. Valori, who later joined a failed rebellion against the Medici, was executed in 1537, and the Duke Cosimo I de Medici took possession of the statue. Now we have two sources identifying the statue: Vasari’s Lives, where the statue is identified as Apollo taking an arrow from the quiver, and Cosimo de Medici’s inventory, where the statue is mentioned as a David laying his foot on the head of Goliath.

In Michelangelo Apollo David, the indefinite shape under the right foot plays a key role in the composition: the subject raises the foot, so that the knee is flexed and the hip and shoulders rush in a twisting motion, with the left arm that bends along the chest and the face that turns in the opposite direction. This spiral posture, called “serpentine”, invites the viewer to move around the figure and to admire it from every perspective. The conception of the figures of this complex and dynamic composition of Michelangelo exerted a strong influence on his contemporaries and also artists of later periods. Although Apollo David was almost carved to completion, Michelangelo left the body surfaces indefinite, as veiled by a thin network of chisel strokes intended to be sanded once the sculpture had been completed. Less finished are the tree trunk that supports the statue and the elements that make it possible to identify the subject: the rectangle on the back of the figure, which might correspond to a quiver or a sling, and the shape under his right foot, which could be a stone or the head of a defeated Goliath.