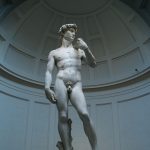 A fresh free city received his hero, Michelangelo Buonarroti, after some years of absence. The sculptor had been traveling across Italy, living in Rome since 1496. Here, he had become the most famous sculptor in all of Italy thanks to his famous work: La Pietà. At the same time, the city of Florence had banned the Medici family, and after a short period of domination by the Dominican friar Girolamo Savonarola, now it was a free Republic. Private and public commissions were numerous and it was again the greatest city to live in for any artist. Everything was set for the creation of the most famous statue in the World: Michelangelo’s David.

An old block of marble

A block of marble had been laying in the courtyard of the Opera del Duomo since about 40 years. The Opera, responsible for maintaining and decorating the Cathedral, planned to add statues of prophets of the Old Testament on the buttresses of the dome, but the work languished. The block that had to become the first statue of this series had been refused by two sculptors in the late 15th century, because of the bad quality of the material. In a final attempt to save this huge, expensive piece of stone, the Opera asked Michelangelo, the best sculptor in Italy, to use his immense ability to finally represent the King of Israel. Michelangelo accepted the challenge.

Michelangelo’s David was created between 1501 and 1504. In three years of work in the courtyard of the Opera del Duomo, Michelangelo kept his work covered with canvas, so that nobody could see. He made a small model of the statue in wax that was submerged with water. Every day, the artist would let some water flow away, what emerged from water was represented in marble. Towards the end of the work, the Gonfaloniere Pier Soderini came in, started to walk around the statue, and then, finally, told Michelangelo: “…you know, this statue is coming up beautiful, but the nose is too thick”. Michelangelo, very proud of his work and with blood pressure probably at its highest, didn’t answer, but picked up some marble powder from the floor and went upstairs, pretending to fix the nose. He let the powder fall from his hand so that it actually looked like he was removing some more marble. When finished, he asked for a second judgment and Pier Soderini, observing the unchanged face, noticed: “Now it’s really wonderful, you put life into it”. Michelangelo didn’t hesitate to tell this story about the Gonfaloniere, making fun of him.

The statue of liberty

As soon as the statue was finished, it looked like a waste to place it on top of a buttress of the Duomo. Moreso because it really didn’t look like a prophet of the old testament: Michelangelo’s David looks more like an ancient Greek or Roman statue. The Republic of Florence created a commission of artists, that included Leonardo da Vinci and Botticelli, to discuss the problem. It was evident that Michelangelo’s David was a symbol of the Republic: represented before his battle with the giant Goliath, it was like Florence waiting to fight his powerful enemies. So in the end, it was chosen to place the statue in front of Palazzo Della Signoria, the symbol of the institutions. Moving the statue from Piazza Duomo to Piazza Della Signoria was not easy because of the dimensions and weight, but also because not everybody in Florence was supporting the new Republic. Supporters of the Medici and supporters of Savonarola were aware of the symbology of the Michelangelo’s David and they threw any sort of thing to the moving statue.

The Medici back in Florence

Turbulent years were ahead: the Medici came back in 1512, were banned again in 1527 and came back again in 1530. During a revolt, in 1527, a bench thrown off the windows of Palazzo Della Signoria hit Michelangelo’s David, breaking the left arm in three parts. In 1540, with Cosimo de Medici moving from Palazzo Medici to Palazzo Della Signoria, which now becomes the Duke’s Palace, Michelangelo’s David was at risk. Imagine a fresh new Duke, 20 years old, in need to consolidate his power (the previous Duke has been assassinated) who finds a statue against his family right in front of his door. Well, Cosimo de Medici was not like any other tyrant. He didn’t destroy Michelangelo’s David, already broken, but he restored the statue. His subtle, expensive plan, was to answer to Michelangelo’s David adding many more statues, like Perseus by Benvenuto Cellini and the fountain of Neptune by Bartolomeo Ammannati, creating the most art rich square in the world.

After almost four centuries, ruined by rain, hail, snow, pigeons and also by awkward attempts to wash it (with acid!!), Michelangelo’s David was in really bad conditions, and it was decided to move it, once and forever, in the Accademia Gallery. It was 1873 when a railroad was built in the city center to move the huge statue while a copy was going to replace the original. This time nobody threw stuff to the moving David!

The final episode of this tormented story happens back in 1991 when a fool threw a hammer to Michelangelo’s David, breaking a small part of the left foot, immediately reattached. Today Michelangelo’s David is one of the most visited attractions in Florence. Together with Monna Lisa by Leonardo da Vinci, it’s the most famous work of art in history.