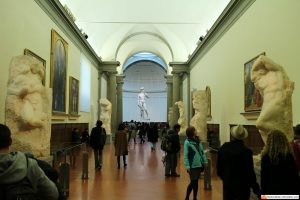 When my customers enter the Accademia Gallery in Florence and we reach the room dedicated to Michelangelo, I always spend some time explaining the famous Michelangelo Slaves. Often this effort is frustrated by people who look elsewhere, to the David statue, which acts like an irresistible magnet. I certainly understand but at the same time I’m frustrated knowing that they’re missing out on some real masterpieces.

All the unfinished statues at the Accademia uncover Michelangelo’s methodology and idea of cutting. Michelangelo accepted the stone carver was an apparatus of God, not making yet basically uncovering the effective figures contained in the marble. As you appreciate the Prisoners from diverse points, one can recognize Michelangelo’s affection and comprehension of the human anatomy. Michelangelo Slaves are remaining with the vast majority of their weight on one foot so their shoulders and arms bend off-hub from the hips and legs. This exact posture gives the Prisoners a more dynamic and compelling appearance, transmitting movement and feeling. It’s a technique widely used in antiquity by Greek sculptors, called contrapposto.

This piece is the most effective and expressive work among the Slaves. It is the first statue one on the left in this room. The figure feels like it is writhing and straining, attempting to burst out of the marble that holds it. Michelangelo is celebrated for saying that he attempted to free the soul caged in the marble. This perpetual battle of man to free himself from his physical requirements is an analogy of the body obstructing the spirit.

On the other side of the room stands the Young Slave. This figure is the most characterized, however appears to be just about bound inside himself, covering his face in his left arm and concealing the right one around the hips. The contrapposto stance is truly misrepresented by the slenderness of the piece of stone and by the somewhat bowed knees. The significant investigation of human anatomy is highlighted in the left elbow and the watchful lines of the curved biceps and triceps. Michelangelo constantly etched out the picture front to back: it plainly shows in the Young Slave, which gives an impression of rising up out of the rock.

Moving on closer to Michelangelo’s David, on the left, is the Bearded Slave the less unfinished of the four Slaves. The figure is pretty much free, just his hands and some piece of his arm, presumably meant to hold something, are unfinished. The face is secured by a beard and a cloth covers part of his legs. The chest is finely represented, showing once again Michelangelo’s knowledge of human anatomy.

The last statue on the left before reaching Michelangelo’s David is called the Atlas, because of his position, remembering the mythological Atlas sustaining Earth. The man is undoubtedly carrying a tremendous weight on his head. More than harmony, here Michelangelo is representing two contrasting forces (the stone pushing down and the body pushing up). Unlike the other slaves, fighting to free themselves up from the marble, this Slave is trying to rise up from the marble.