Palazzo Vecchio, the City Hall of Florence, stands there since 1299. In more than 700 years, the palace has been enlarged and restored several times, and his destination also changed in history: from Prior’s Palace (the priors were the delegate of the guilds in the government of the Republic) to Duke’s Palace with Cosimo I de Medici, to seat of the Italian Chamber of Deputies (1865-70), to seat of the Municipality, which still is today. In his long history, many secret passages and rooms have been created for various reasons. Recently, Palazzo Vecchio secret passages raised a lot more interest than in the past because they are one of the locations of the Novel Inferno by Dan Brown. The book was out in May 2013, and the film is scheduled to debut in October 2016.

The Duke of Athens secret staircase 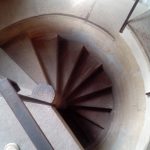 In 1342, the Republic of Florence called a foreigner, Walter of Brienne, to be the chief magistrate of the city. Fights between factions were incessant, and any agreement was impossible. They needed someone who was not linked to any of the parties. The house of the magistrate was very close to Palazzo Vecchio: only a small street separated the house from the palace. Walter of Brienne was an ambitious man, he had the title of Duke of Athens (actually he had little to do with the ancient Greek city) and he believed it was possible to rule Florence lifetime, also because he adopted a policy favorable to the lower classes that earned him a lot of supporters. He banned the Priors of the Guilds from Palazzo Vecchio and restored the palace including his house inside the castle. He also built the secret staircase, that was a sort of emergency exit. The problem for Walter was that Florence had a very strong oligarchy: being supported by the lower classes was important in the short term, but after some months, the financial crisis hitting the Florentine banks started to show his effects even on the common people. Walter of Brienne was forced to leave Florence on May 25th, 1343, the day of St Anne. Today, the secret staircase is one of the most famous Palazzo Vecchio secret passages since the emergency exit was used by Robert Langdon in the novel Inferno by Dan Brown.

Palazzo Vecchio secret passages in the Studiolo di Francesco I 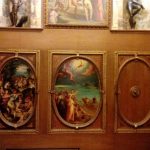 There is a small room, shaped like a treasure chest, close to the famous Hall of the 500. It’s the Studiolo di Francesco I, the legitimate successor of Cosimo de Medici Grand Duke of Tuscany. Cosimo I, after buying the Pitti Palace, abdicated in favor of his son and the new Grand Duke was more concerned with science and alchemy than with politics. The small room was his secret room, where he stored his collections of rare objects, either natural and artificial. The Studiolo has a gorgeous decoration with paintings by Vasari and his workshop that represent mythological subjects, linked to the collections of Francesco. In particular, each painting was a sort of inventory of what the cabinet behind the painting contained. Among all the doors behind the paintings, some are not cabinets but secret passages: One opens on a staircase, from where you can reach another secret room: the Tesoretto, which was the studio of Cosimo I, and from there, with another secret passage you can reach another room, now empty, which probably contained a strongbox. From here, finally, you can go back to the Studiolo through yet another door.

The secret room of Bianca Cappello 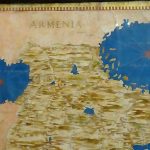 This is another of the Palazzo Vecchio secret passages that were mentioned in Dan Brown’s Inferno. The Room of the Maps is one of the most appealing in Palazzo Vecchio. Travelers from anywhere in the world except Australia (which had not yet been discovered at that time) can see a map of their country, drew in the second half of the 16th century. Behind all the maps, again, are cabinets, except for one map: Armenia. Behind this map is a door that leads to a secret passage. From here, you exit on an internal terrace and then to a secret room, from where Bianca Cappello, secret lover and later second wife of Francesco I, could spy inside the most important room of the Palace: the Hall of the 500.