The Pitti Tondo is a bas-relief sculpture by Michelangelo at the Bargello Museum in Florence Italy, depicting Madonna and child plus John the Baptist. Made in the same period as Michelangelo’s David, the sculpture is a typical “desco da parto”, the traditional gift made to new mothers in Renaissance Florence to celebrate a birth. 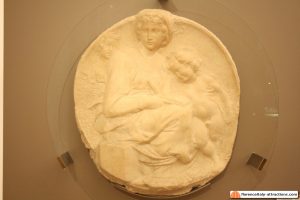 The work was made for Bartolomeo Pitti in 1503-04. Busy with the statue of David, Michelangelo found time to dedicate to some highly profitable private commission. The work was bought by the Florentine Galleries in 1823 from an antique dealer and destined to the newly created Bargello Museum.

The Pitti Tondo represents the virgin Mary, with a book on her knees, looking away with an absent look, like if she was reflecting on what she just read: the prophecies where she finds evidence that her son, sadly, will sacrifice his life to save the mankind. Mary is the main character of the composition: Michelangelo emphasizes her importance representing her with a higher relief and a superior level of definition. The child, resting on her legs, and even more John the Baptist, standing behind the right shoulder of Mary, are almost a sketch, in lower relief. Michelangelo is creating an effect of “unfocused” around Mary, just like he did for the background of his Doni Tondo. Because of this, the Pitti Tondo looks like a painting in marble, where depth is rendered with the different relief and with the different level of “unfinished”. In this work, we can also see the influence of Leonardo Da Vinci on the young Michelangelo, whose composition is not dissimilar from many other paintings by Da Vinci and from the Madonna of the Goldfinch by Raphael, also inspired to the work of Leonardo.