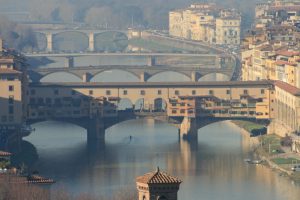 Ponte Vecchio means old bridge, it is indeed the most ancient bridge in Florence and one of the most visited Florence Italy attractions. Ponte Vecchio stands in the narrowest point of the Arno river, aproximately in the same place where the first Roman bridge was built after the foundation of Florentia. After a devastating flood destroyed all the bridges of Florence in 1333, Ponte Vecchio was rebuilt (around 1345) by Architect Neri di Fioravante. The bridge is filled of shops (goldsmith’s) on both sides and crossed by the Vasari Corridor, the aerial passageway connecting Palazzo Vecchio, the Uffizi Gallery and Pitti Palace.

Any single shop on Ponte Vecchio is a jewelry, but the shape of the shops recalls something else. Originally they were butcher’s shops, moved here by the Republic of Florence for sanitary reasons. Using the Arno river to throw away their waste, they made fishes very happy and, at the same time, didn’t soil the streets. Their destiny changed when the Vasari Corridor was built right on top of the shops; the Medici Grand Dukes couldn’t stand the smell and around 1602 decided to move the butcher’s shops elsewhere, again. Now, everybody knows that jewelries don’t stink, so they looked like a perfect fit for the bridge: if they’re still there, after 400 years, it means they were.

Ponte Vecchio can be found at this location:

The Medici family didn’t have an easy life ruling Florence. Many attempts to take over them, conspiracies against the family, assassinations of some of the members were the rule more than the exception for all the 15th and part of the 16th century. Having become Duke of Florence, Cosimo de Medici moved away from the Medici Palace to set his home in Palazzo Vecchio, but his wife Eleanore from Toledo, unhappy of the new location, bought the Pitti Palace. Cosimo ordered his Architect, Giorgio Vasari, to build a passageway connecting the two buildings: the Vasari Corridor.