Exchanging thanks yesterday between the famous director Ron Howard and the Mayor of Florence Dario Nardella. Ron Howard is filming Inferno, the movie inspired to the famous novel by Dan Brown. This is how the news appeared on the local newspaper, La Nazione:

Florence, May 5, 2015 – Third day of filming in Florence for the new film by Ron Howard ‘Inferno’. For several days now there has been turmoil in the city for the presence of the imposing troupe and major movie stars, starting from Ron Howard and Tom Hanks. Meanwhile, today, the American director wanted to send a message to the city: “We are very grateful to the mayor, the Tuscany Film Commission and the citizens of Florence for welcoming us to town. If you read the novel by Dan Brown, you already know that Florence, the same way as Robert Langdon, is a character in the film. We are excited and we feel enormously privileged to shoot the film in such a beautiful and historically significant city like Florence. “

“It was a great honor to host you in Palazzo Vecchio: I wish all the best to your movie.” With a post on Twitter in English, the mayor of Florence Dario Nardella responds to Inferno director Ron Howard, who thanked the city of Florence, where he is with his crew to film Inferno. 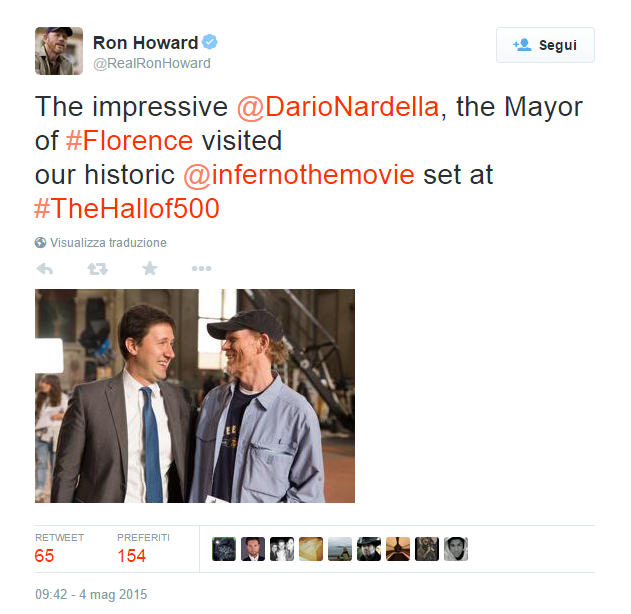 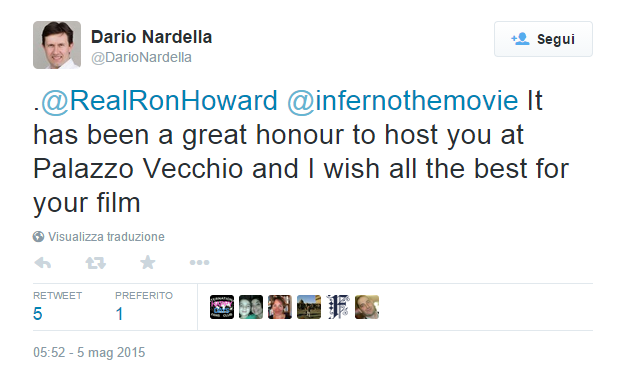 Here are some pictures of the tools installed in the historical center, all around Palazzo Vecchio. You can also read more about Dante’s Inferno and Inferno filming locations.

For pictures of the troupe at work, see the original article by La Nazione here.