Basilica of San Lorenzo – An ancient church, a new church 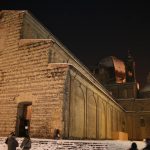 The Basilica of San Lorenzo is one of the most ancient churches in Florence. Imagine that Florentia (the Roman village) was so small that the church location was actually outside the city when it was consecrated by St. Ambrose in 393 a.D. San Lorenzo became the Cathedral of Florence Italy, until Santa Reparata was built some centuries later. More than 1000 years later, with the Medici family rising to power and living in the San Lorenzo area, Giovanni di Bicci (ancestor of the Medici) asked Brunelleschi to design the sacristy (old sacristy, not to be confused with the new sacristy by Michelangelo) and later Cosimo de Medici “the elder” asked him to rebuild the church entirely, so that San Lorenzo is considered a great example of Renaissance architecture. Today, the Basilica is an off-the-beaten-path attraction.

The burial place of the Medici family

Being the parish church of the Medici, the church became the burial place for the members of the family. Inside the church lays the tomb of Giovanni di Bicci (old sacristy), Cosimo the Elder (in front of the main altar) and Piero the Gouty (old sacristy again, together with his brother Giovanni), the first three generations of the Medici family. Many more tombs are in the Medici Chapels, once part of the church even if today they are a state Museum. This is also the place where most of the marriages of the family took place, at least until they lived in the Medici Palace.

Watch this video on the Basilica of San Lorenzo:

The Basilica of San Lorenzo can be found at this location:

In 1419, Giovanni di Bicci of the Medici family asks Brunelleschi to design the Sacristy of the San Lorenzo church. It’s the story of the Renaissance: in repentance for their sins, rich people try to enrich their parish church to save their soul! Filippo Brunelleschi creates a symbol of Renaissance architecture, completely moving away from the Gothic shapes. Using the “perfect” geometry and symmetry of the square and the circle and no heavy decoration, he builds a cube, surmounted by a hemisphere (the dome), and reproduces the exact same shapes in smaller scale in the apse. The decoration representing the four Evangelists, made by Donatello, was reason for arguments between the two artists because Brunelleschi didn’t want any other color than white (plaster) and gray (sandstone), in order to emphasize the geometry. In the center of the room lays the tomb of Giovanni di Bicci, while on one side is the tomb of Piero the Gouty and his brother Giovanni, a masterpiece in composite materials (marbles and bronze) by Andrea del Verrocchio.