If you search for Florence Italy attractions on Trip Advisor, you would expect to see Michelangelo’s David, the Duomo or the Uffizi Gallery on top of the rankings. Surprisingly, none of the undisputed top three stands on top of the most popular travel website. Another attraction, the Basilica di San Miniato al Monte, dominates the standings. Not in the historical center and on top of a hill, San Miniato al monte is outside of the usual tourist routes. My guess is that people clever enough to get there and explore this treasure chest are amazed by the serenity of the monastery, especially when compared to the herds visiting the most important museums.

Miniato (Minias) was an Armenian prince who lived in the 3rd century a.D. Either serving in the Roman army, or coming to Italy as a pilgrim to Rome, he retired in Florence to be a hermit in the hill South of the city. Persecuted by the Romans, he was tortured and beheaded, but he picked up his own head, crossed the river Arno and went back up on his hill, where he finally laid down and died. Saint Minias is considered the first Christian Saint from Florence. 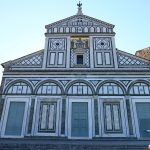 In the early Middle Ages, a shrine and then a chapel were built in this miraculous place, but when a tomb was found not far from the chapel in 1013 the enthusiasm grew again around the legend, and the bishop decided to build a new Basilica. With his facade decorated during the 13th century, the Basilica di San Miniato al monte represents the greatest example of Florentine Romanesque style. The merchants guild sponsored the decoration, made of typical Florentine white and green marble sheets that represent christian symbols and geometrical shapes. 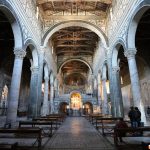 Even inside, San Miniato al Monte is one of the better preserved examples of Romanesque church, with a crypt underneath while the presbitery is well above the place reserved to the common people, to flatly separate the clergy. San Miniato al Monte is one of the few places in Florence where you can find Romanesque, Gothic and Renaissance artwork. Right before the presbitery, a Renaissance temple by Michelozzo contains a Gothic altarpiece. Going upstairs, on the right,  the sacristy is frescoed with stories of St Benedict by Spinello Aretino (14th century). The pulpit is a rare example of Romanesque sculpture in Florence and behind the altar you can admire a mosaic representing Jesus Christ. Going back downstairs on the other side of the presbitery, you will see the magnificent chapel dedicated to the Cardinal Giacomo from Portugal, who died in Florence in 1459 while traveling as ambassador. That was the period of mature Renaissance and probably no other Portuguese Cardinal had such a beautiful burial place in history, designed by the Rossellino brothers, with works by Luca Della Robbia, and altarpiece by Antonio and Piero del Pollaiolo and frescoes by Alesso Baldovinetti.

All considered, I can’t blame people who rated this place five stars, also considering there is no ticket to pay at the Basilica di San Miniato al Monte. Opening hours are variable, as this is an active monastery, normally they are open from 9:30 AM to 1:00 PM and from 3:00 PM to 7:00 PM. During the Summer, generally, they stay open from 9:30 AM to 8:00 PM with no break. Avoid Sunday mornings (unless you want to attend the Mass) and you will be ok.