The tale of a knight 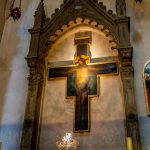 Santa Trinita is my favorite off-the-beaten-path attraction in Florence. Speaking of Santa Trinita church, we need to say something about Giovanni Gualberto (985/995-1073), a Florentine knight whose brother was killed in the streets of Medieval Florence. As his position required, he pursued the killer to have revenge, riding to the hills south of the city, where he reached his enemy. He was about to kill him, when the man asked for mercy, kneeling and extending his arms. In this position, the killer was so similar to Jesus Christ crucified that Giovanni decided to forgive him. The knight immediately went to pray at the monastery of San Miniato al Monte, on top of the hill, and a miracle happened: the painted cross in the church moved his head approving the act of charity (today this painted cross in inside Santa Trinita church, click picture on the left to enlarge). Giovanni decided to become a monk himself but soon realized that the principles he firmly believed in were not respected by the high levels of the Catholic clergy, including his Abbot and the bishop of Florence, whose offices had been bought by their families. He left the monastery with other monks and started a pilgrimage that ended in Vallombrosa, a mountain close to Florence where he started his own community in 1038, changing the Benedictine rules. The new rules were approved by the Pope in 1055, with the official recognition of a new religious order: the Vallombrosans. Differently from the Benedictine monks, the Vallombrosans will have more contacts with people and, thanks to their well-known honesty will also be involved in business-related affairs (for example, managing funds for the Republic of Florence). Giovanni Gualberto was proclaimed Saint in 1193. During his life, he will also have a role in the dispute between the Papacy and the Holy Roman Empire, helping Matilde of Tuscany. 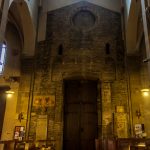 Being active in the daily life of the city also meant having monasteries close to the city. The church of Santa Trinita was built during the life of Giovanni Gualberto (11th century) just outside the city of Florence. Today it is a central church, but at that time the city was very small, and Santa Trinita was just outside the defensive wall (and there also was a small river flowing into the Arno river, later moved). The church was in romanesque style, but the only remains of this ancient building can be seen in the counter-facade (click picture on the left to enlarge). Everything else has been rebuilt in gothic style between the 13th and 14th century. The church is dedicated to the Holy Trinity. As many churches in Florence Italy, Santa Trinita granted rich families the patronage on chapels, and here come the great works of art inside the church. 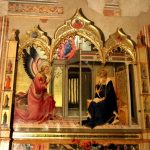 The Bartolini Salimbeni Chapel in Santa Trinita is a great example of late gothic style; the chapel features frescoes (partly damaged) with the stories of Mary, and a beautiful altarpiece with the Annunciation. The chapel was decorated by Lorenzo Monaco, Benedictine (not Vallombrosan) monk from Siena, one of the great interpreters of this style in the early 15th century, an age when the Renaissance was knocking at the door already. This chapel helps the visitor of Santa Trinita to understand the difference between Gothic and Renaissance style because next is one of the greatest works of the Renaissance: the Sassetti Chapel. 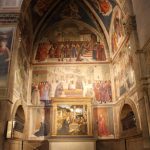 The Sassetti Chapel in Santa Trinita was decorated between 1482 and 1485 by Domenico Ghirlandaio for Francesco Sassetti, director of one of the branches of the Medici bank. It’s considered one of the greatest fresco works of the Renaissance. The fresco cycle is dedicated to the life of Saint Francis of Assisi and contains many portraits of people living in Florence at that time, like Lorenzo de Medici “The Magnificent” and his sons, and a self-portrait of the painter himself. An altarpiece representing the Adoration of the shepherds stands in the center of the chapel.

More works, all for free!

This is just the two top works inside the Santa Trinita church, there is much more to see inside. Santa Trinita is often overlooked by tourists, but it’s one of my favorite. It happens that I have a three-hour tour without any ticket, and I always include Santa Trinita as one of the attractions. You can have some problems on Sundays, but any other day you will find the church open until 12:30 pm and then again in the afternoon, from around 3:30 pm.

Artwork that was in Santa Trinita

There is so much to see already, but the church had to be amazing three centuries ago before some great works were moved away. Among the works that were made for Santa Trinita, there are two of the great attractions of the Uffizi Gallery: the “Santa Trinita Maestà” by Cimabue and the “Adoration of the Magi” by Gentile da Fabriano.

Watch this video on Santa Trinita:

You can find Santa Trinita church at the following location: