In another article, we dedicated our attention to the most famous circular painting in Florence: the Doni Tondo, by Michelangelo Buonarroti. Today we step back some decades to talk about the Tondo Bartolini by Filippo Lippi, on display in the Palatine Gallery of the Pitti Palace.

The circular shape was considered the perfect one and, as such, suitable to represent sacred events, but there is another reason why it was largely used in Florence: it’s because of the desco da parto tradition. The circular serving tray traditionally used to serve fresh fruits and other food to women right after a birth evolved into decorated serving trays (like the example in the picture on the left) and later into circular paintings. 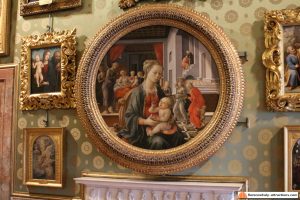 The work by Filippo Lippi was commissioned in the 1450s, most probably by Leonardo Bartolini, a rich merchant, to celebrate a birth. And everything in the Tondo Bartolini speaks about a birth, representing the Virgin Mary with her children in the foreground, and the stories of St. Anne, including the birth of the Virgin Mary, in the background. It was a difficult challenge, for Filippo Lippi, to arrange the stories in the background, considering the circular shape of the painting: by the way, he inaugurated a tradition that will be followed by Michelangelo in his Doni Tondo. 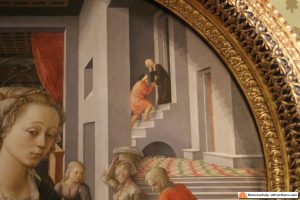 In the Tondo Bartolini, the focus of the representation was definitely the Madonna: not only the Virgin, sweet and beautiful, is in fact with the Child in her lap on the foreground, but the background tells the story of her Immaculate Conception and of her birth. On the right, we can see the meeting between Anne and Joachim (Mary’s parents). On the left, the painter depicted the birth of the Virgin. All the composition in the background makes use of the linear perspective, giving us the illusion of depth. Motherhood is clearly the subject: the Virgin Mary is holding a pomegranate, symbol of the passion of Jesus Christ but also a symbol of fertility.

The face of the Virgin Mary resembles that of Lucrezia Buti, secret lover and later wife of the painter. The blonde Virgin certainly inspired Botticelli, Filippo Lippi’s pupil, who always represented blonde women in his paintings.