Italy is famous for nice tasty food, and we have typical recipes in each region; Tuscan recipes are among the most appreciated worldwide, and in this section I want to show you how to make this same recipes at home, but also suggest what you can taste in any typical restaurant in Florence Italy.

Tuscan cuisine in the Renaissance

If you decide to follow my Tuscan recipes, don’t expect to eat the same things as the Medici family, also because you wouldn’t be amazed: for rich families of the Renaissance, food meant meat and wine. Any meal not including meat and wine was intolerable and probably Lorenzo de Medici would have thrown the dish away and yelled at the cook if he proposed a soup. Because of this, most rich people suffered by gout and one of the important members of the Medici family was Piero “The Gouty”. They also used to season meat with sweet jams, creating any sort of sweet and sour combination. On top of this, wine was not exactly as good as today and often they mixed wine and honey to improve the taste. Many ingredients widely used today in Tuscan recipes were missing before the discovery of America, but even later, if we consider that, for example, Europeans didn’t eat tomatoes for all the 16th century, considering that vegetable like a decorative fruit. What about the poor people? They had to arrange recipes with cheap ingredients, using vegetables, stale bread and animal parts that rich people would discard. Wine, by the way, was part of their diet, often mixed with water, not only to save money but also because it was a way to disinfect water.

When Caterina de Medici married Henry II of France and moved away from Florence, she made sure to have with her many cooks and all her dinnerware: this is how the fork arrived in France. Only rich people used forks at that time in Italy, not even rich people in France. Later Caterina’s husband became King of France and she became the Queen. We think she had an influence on the developement of the French cuisine: isn’t it based on elaborate sweet and sour taste? Every French will tell you that this is not true, and maybe it’s just a legend, but we like to believe that there is some truth in this.

Most of the typical Tuscan recipes today originate from the recipes used by poor people back in the centuries, but everything evolved to fit the different taste. When you speak of Tuscan recipes, simplicity is the word: few high quality ingredients combined to obtain incredible flavors. Tuscan bread, for example, is made with flour, water and natural yeast: no salt is added, so that it combines very well with the strong salted taste of Tuscan cured meats. The legendary origin of the Tuscan bread speaks of a war between Florence and Pisa: Florence depended on Pisa for importing salt, and there is the solution to the lack of salt. Wasting bread is still considered a bad thing, and in Florence we have many soups based on stale bread, clearly a legacy of the medieval recipes. The most famous of these soups is the Ribollita, but also the Pappa al pomodoro. Then comes the exception: one of the most famous Tuscan recipes is quite expensive: the Bistecca alla Fiorentina (expensive, but again: simple). There is a large variety of Tuscan recipes, some of them are typical of different Tuscan cities; not only Florence, but also Siena, Pisa, Lucca and so on. Other dishes are the Tuscan version of Italian recipes, adapted (most of the time simplified) by the Tuscan mothers and grand-mothers, like the Tuscan gnocchi. 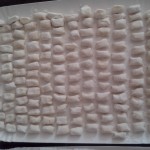 Gnocchi is a typical Italian pasta dish, knows worldwide as dumplings. It is created with boiled potatoes, flour and eggs, but in Tuscany and Florence Italy we aim at simplicity, so we don’t use eggs; result: they are even better! You can cook gnocchi right away or freeze them in portions to cook later. This recipe is not only very easy to make at home with a meat sauce but also a great basis to create a vegetarian dish you will amaze your guests with. Read this recipe and you will be eating like a Florentine before you know it!