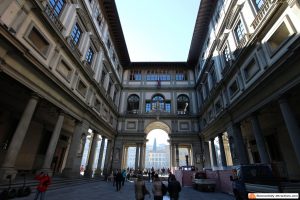 The Uffizi Gallery is one of the top Florence Italy attractions; it is the most famous museum in Florence and one of the most famous in the world. The Uffizi palace, whose construction was begun by Giorgio Vasari in 1560, by order of Cosimo I de Medici Grand Duke of Tuscany, was the seat of public offices.

The palace is most famous for hosting one of the world’s largest collections of works of art; Among the artists whose works are in the Uffizi : Botticelli (Birth of Venus, La Primavera), Giotto, Beato Angelico, Filippo Lippi, Leonardo Da Vinci, Raphael, Michelangelo, Caravaggio, Dürer, Rembrandt, Rubens.

The Medici family, in their three centuries of domination of the city of Florence, amassed an incredible amount of works of art: most of the paintings of the Uffizi Gallery belonged to the Medici collections.

History of the Uffizi

In 1537, Cosimo de Medici became Duke of Florence and in 1540, he took possession of the Palazzo Della Signoria, the place that had been the seat of the Republic of Florence for centuries. From his new home, Cosimo wanted to control as much as possible, and he decided to move all the residual institutions, the 13 magistracies (called “Uffizi”) into a new palace. The Uffizi Palace was designed by Giorgio Vasari and built from 1560 to 1580. The same architect built the Vasari Corridor, a safe passageway that connects the Uffizi to both Palazzo Della Signoria and the Pitti Palace (which had become the new residence of the Medici in 1549). In the new construction, Vasari incorporated the ancient church of San Pier Scheraggio. In 1574, after the death of both Cosimo and Vasari, Francesco I de Medici completed the construction assigning the job to Bernardo Buontalenti, and decided to close the loggia at the last floor and use it as a gallery for his collection of paintings. Bernardo Buontalenti added the Tribune of the Uffizi, a room with gorgeous symbolic decorations representing earth, fire, water and air, which is considered the first room of the upcoming museum. In 1586, Buontalenti created a theater inside the building. The next Medici Grand Duke, Ferdinando I, moved in the Uffizi palace the Opificio Delle Pietre Dure, a public institution created to produce precious objects, mostly for decorating the Medici Chapels. In 1591, the Uffizi Gallery was open to the public on request, but only in 1769, after the Medici dynasty died out, it was opened to the general public. It was the new dynasty of Grand Dukes of Tuscany (Hapsburg-Lorraine) to concentrate paintings in the Gallery; until then the collections included any kind of precious object (armors, scientific tools, mummies…). With the Italian unification, for a short while the Uffizi theater became the seat of the Italian Senate. After World War II, the theater was sectioned in two floors to obtain more rooms. In 1993, the Uffizi Gallery was the target of a car bomb that Sicilian mafia placed close to the museum, causing the death of five people and damage to some of the paintings. Currently, the Gallery is undergoing a renovation process whose goal is to create a larger museum to make space to all the paintings which are still in storage.

Even for who leaves Florence without visiting the Gallery, the big U-shaped Uffizi palace is an attraction, representing late Renaissance architecture designed by one of the greatest architects of Florence: Giorgio Vasari. The decoration of the palace in white plaster and gray stone (pietra serena) is inspired to Brunelleschi. The architrave on top of the ground floor loggia hides the arches that sustain the building. The palace is decorated with statues of famous Tuscan people in history, featuring artists like Donatello, Michelangelo and Da Vinci, poets like Dante Alighieri, Francesco Petrarca and Giovanni Boccaccio, navigators like Amerigo Vespucci, scientists like Galileo Galilei and politicians like Lorenzo de Medici and Niccolò Machiavelli.

The Collections of the Uffizi Gallery

Entering in the Uffizi Gallery you have to go upstairs to reach the top floor, where the tickets are checked for the last time. The top floor is a U-shaped corridor with windows on one side and rooms on the other side. The corridor itself displays three side-collections: 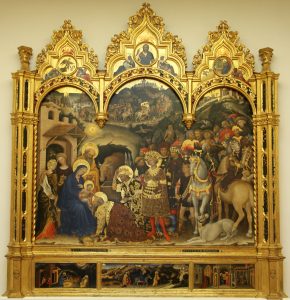 but it’s inside the rooms where the main collection of paintings of the Uffizi Gallery is actually waiting for you. The rooms at this floor will show you the history of painting, beginning from room 1 with the most ancient paintings (late 12th/early 13th century). In room 2 you will find the three “Maestà”, huge Madonna and Child paintings made by Giotto, Cimabue and Duccio Di Buoninsegna. From here, you will reach more rooms that show the evolution of the Gothic style, featuring the paintings from Siena and from Florence, to get to the final stage of the International Gothic. The top attraction in this first group of rooms is the Adoration of the Magi by Gentile da Fabriano. The next room shows paintings of the early Renaissance, then you will be introduced to the age of Lorenzo de Medici “The Magnificent”, with the most important works of the Uffizi Gallery: Botticelli Birth of Venus and La Primavera, Leonardo Da Vinci’s Annunciation. 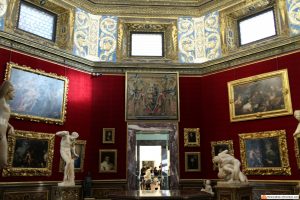 You can take a breath because the museum path sends you back to the corridor, but it’s time to see one of the most amazing rooms of the Gallery: the Tribune of the Uffizi. Five more rooms complete the eastern corridor of the top floor, showing the early renaissance paintings made in other Italian cities. Back to the corridor, you will now reach the short side of the U-shaped building. There are no rooms here, but beautiful sights. On the river Arno side, you can see the Basilica di San Miniato, the Pitti Palace, Ponte Vecchio and the Vasari Corridor. On the other side, you can see Palazzo Vecchio and the Duomo. 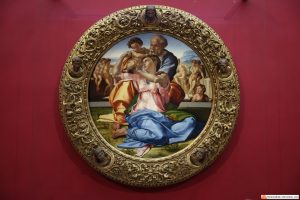 It’s now time to reach the western corridor: the first group of rooms displays paintings of the late 15th/early 16th century, with artists like Domenico del Ghirlandaio, Pietro Perugino, Filippino Lippi, Piero di Cosimo and more, to finish with a variation: a collection of ancient sculptures, that Lorenzo de Medici donated to the Medici gardens, in order to allow young sculptors to learn from examples. Here is where Michelangelo moved his first steps in the world of sculpture. The next room shows indeed a painting by Michelangelo, the Doni Tondo: the only existing painting on panel which is safely attributed to the great artist. With the Uffizi under restoration, at the moment of writing the other rooms of this corridor contain the early renaissance works that once were in the first corridor, including Botticelli, Paolo Uccello, Beato Angelico. The path through this floor ends with the Uffizi terrace, built on the Loggia Dei Lanzi, from where you can have a privileged view of Palazzo Vecchio, the Duomo and other monuments and where you can relax having a coffee. When ready, go downstairs and prepare to visit the first floor. 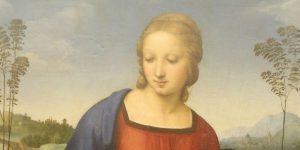 After arriving at the first floor of the Uffizi gallery, you will find a small room with sofas. You can go to the left to reach the “blue rooms”, in a lateral wing of the Uffizi palace. Here you can see the foreign section of the collection, split in several rooms representing the various schools of painting, from French to Spanish to Flemish. Among the great artists represented here, you can find Goya, Rubens, Rembrandt. It’s something that it’s a bit off-topic in the Uffizi Gallery, and not many take advantage of this chance. Back to the sofas, you can continue the visit of the U-shaped building. At this floor, there is no corridor: you will simply go through the rooms, starting from one that contains important Roman statues and fragments, the ones that inspired the master artists of the Renaissance. 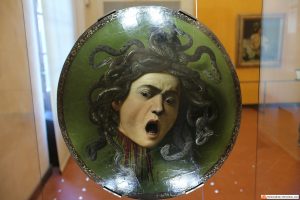 Then you have a series of rooms about the mannerism (late renaissance trend very active in Florence), with the paintings by Andrea Del Sarto, Rosso Fiorentino, Pontormo, Bronzino (including the family portraits of Cosimo de Medici). Inexplicably, the room dedicated to Raphael is here (I would have placed his paintings close to Da Vinci and Michelangelo), featuring works like the portrait of Pope Leo X (Giovanni de Medici) and the Madonna of the Goldfinch. After some more rooms, there is a large one containing paintings by Titian, most notably the Venus of Urbino. You are reaching the windows on the river Arno again, and after another look at the amazing Ponte Vecchio, you are ready to see something new… to be shocked by something new, which is what probably happened at the time this painter showed his works: I’m trying to say that the final rooms of the Uffizi Gallery are dedicated to Caravaggio and his followers, who revolutionized the art of painting between the late 16th and the early 17th century. We are finally at the end of the collection, but not at the end of your walk. You still have to go downstairs to reach the ground floor and then through the huge bookshop of the Uffizi Gallery, where you can buy not only books but also souvenirs, Christmas decorations, posters, DVDs and even fashion items.

Famous artwork in the Uffizi Gallery

It’s really impossible to make an exhaustive list, here is just some of the highlights of the Uffizi Gallery:

The Uffizi Gallery can be found at this location:

The Uffizi Gallery is open with the following schedule:

The Gallery is closed in the following days: 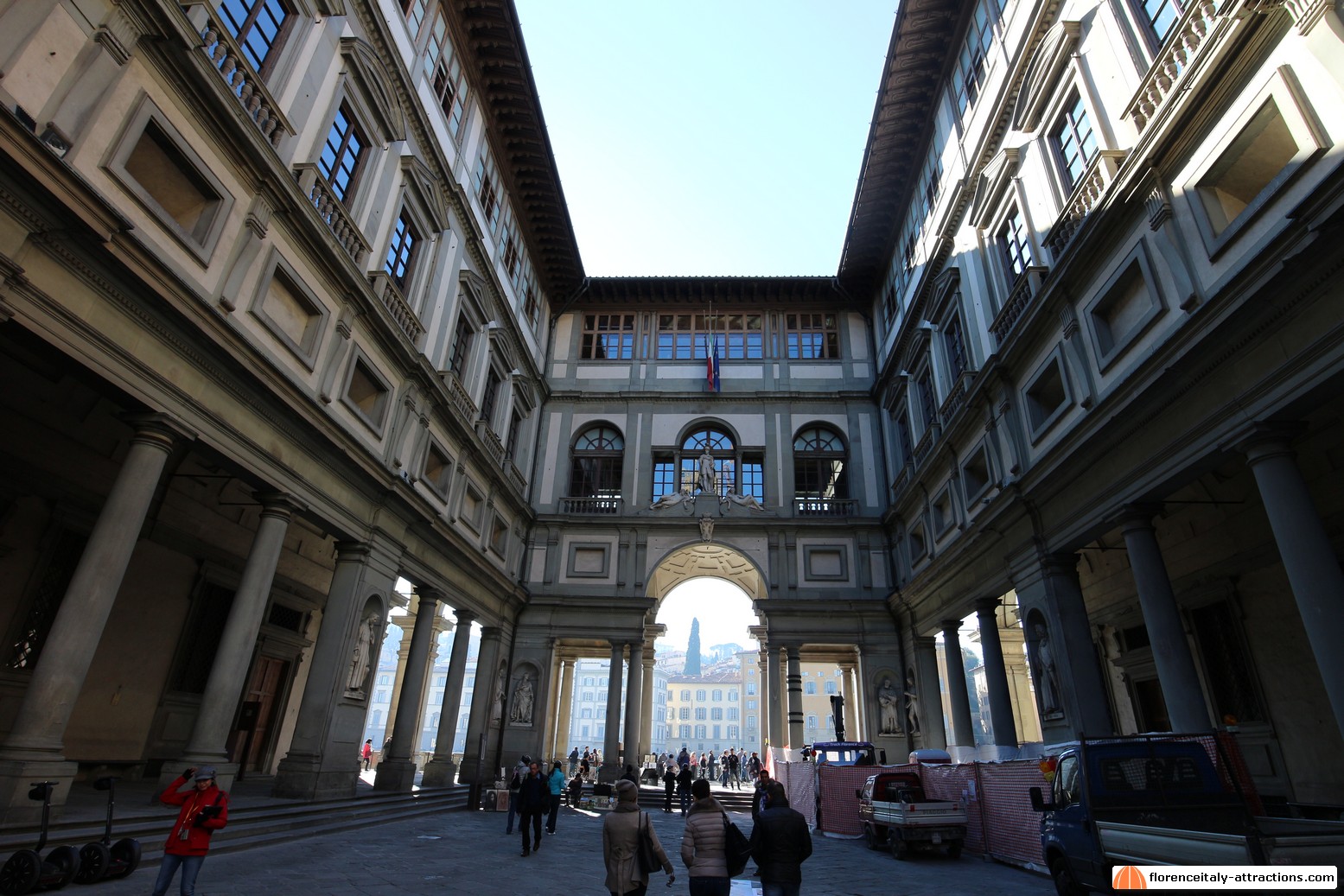