There are several statues and paintings representing David in Florence, and everybody knows about Michelangelo’s David, while most of the travelers with a minimum knowledge of art history can also mention Donatello’s Bronze David, but there is a third statue, Andrea Del Verrocchio David, which is unknown to most people, although it can rival the most famous sculptures. Verrocchio’s David is at the Bargello Museum. 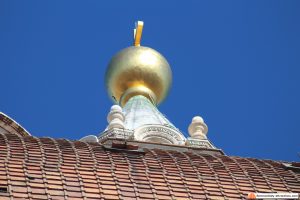 Andrea Del Verrocchio began as a goldsmith and then, showing great technical versatility, became an artist and entrepreneur and opened a shop in which you could commission, as well as paintings and sculptures, works of gold, drawings and plans for monuments. Around 1450, Verrocchio’s workshop was one of the most busy in Florence, counting on a large number of apprentices, most notably Leonardo Da Vinci, and working for the most prestigious patrons, especially the Medici family. Andrea Del Verrocchio received his most important commission from the Opera del Duomo. It was about completing Brunelleschi’s dome with the golden ball which stands on top. It was a great work of engineering, and participating in this project was probably crucial for the future developments in the art of Leonardo Da Vinci. As Verrocchio became more and more famous, he received commissions directly from the leading family in town, including the tomb of Piero the Gouty and his brother Giovanni, which was placed in the Old Sacristy of San Lorenzo and is a magnificent work in bronze, sandstone and red marble.

The bronze statue of David was commissioned by the Medici family to decorate the garden of the Medici Palace. The Medici evidently found in David a symbol of their power, given that they already had another similar statue (Donatello’s David). Indeed, the work by Donatello was taken into consideration as a source of inspiration by Verrocchio, who completely reversed the previous visions of this figure. Previously the biblical hero was represented as a kind of strong and vigorous warrior while Verrocchio presents him as a young man, “arrogant” and sure of his actions. Do not miss the characteristic elements, such as the giant’s head at the foot of the child, but many other things make it very different from their predecessors, as the mocking expression on the boy’s face, sometimes provocative; also you have to notice his posture, almost as if he was the star of a photo, and yet the details of the veins on his arms, which help to make a picture of a spontaneous and provocative boy with his attitude. I think Verrocchio David is the statue that most represents the young shepherd as it is described in the Holy Bible: a young boy going to fight wearing a light cloth. He was not certainly naked, as in Donatello or Michelangelo statues.